The research on Pristina focuses on culture, history and architecture. These dimensions are explored through personal accounts and tend to offer a pool of multiperspectival narratives, democratizing public discourse and the way local histories are told. By means of digital storytelling we want to bring out the many facets of the city and contribute towards a multilayered understanding of urban and socio-economic developments, starting from the interwar period until today.

Pristina project is part of the “Inter-community Dialogue through Inclusive Cultural Heritage Preservation” project funded by the European Union’s Instrument contributing to Stability and Peace (IcSP) and implemented by United Nation Development Programme (UNDP) in Kosovo. 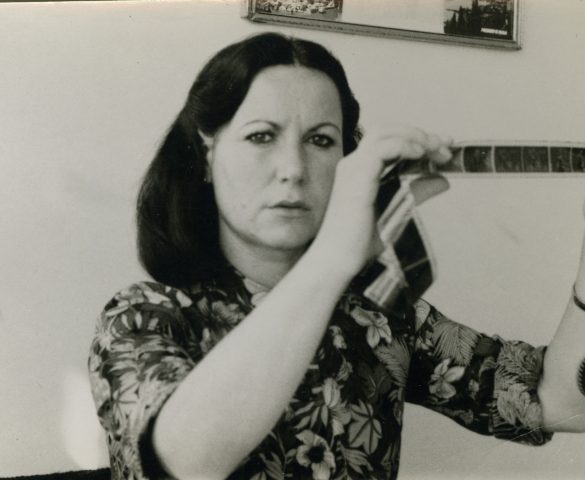 He was Russian, or Serbian, I don’t know, a Pier. We called him Uncle Pier, he was an old photographer. He developed a photograph of mine in a handkerchief, but I lost it, you know. […] He lived in Peja, the master of… they called him so, but he was poor, he looked like a thug, but he was the first photographer at that time, yyyh {onomatopoeic} as far as I know, he was old even back then, let alone… They called him majstor [Serbian – master]  Pero, you know, Master Pero. He loved me a lot, you know, and he developed my photograph in one of those {shows the palm of her hand}, I was surprised how the photograph could come out so, just like they do now, but technique was very primitive, the developing and everything. This is how I learned, generation after generation.

Often without my father’s knowledge, when someone asked me, ‘Develop my film roll!’ I was scared my father would get angry with me that I did it, because he was very pedantic, and he was afraid I would destroy it, but that’s how I learned, without risking it you could not… for example, we worked a lot with the army. They sat for a picture on Sundays. We had to engrave in the frames of the photographs, ‘Don’t forget me!’ You know they had them with different dedications. You had to use the photocopy machine, we did that for the entire army (laughs), and for all of these processes, different machines were used at that time.

We were at that time, though, to, to say it, there are different stories now, but, in the time of the former Yugoslavia, during the time of communism… we were, well, celebrating our slave and my father was prvoborac and he fought during those great wars that were, well, we were, everybody here, especially here in the village, we were all celebrating our slave. Our family slava was Đurđevdan and it is normal that we were preparing everything that was at that time, and we who had the possibilities because we were not really wealthy, and well it was obligatory to make what was important then, and we had guests, I know as children we were looking forward to those days of slava that lasted a day or two, three, mostly three days, and the guests who came to us normally during this time and those gatherings that we had during the slava. So that’s it, and let us not talk about Christmas, Easter, I think it was celebrated the same as we celebrate it today, and it is something that is probably part of our tradition that we will cherish in the future. 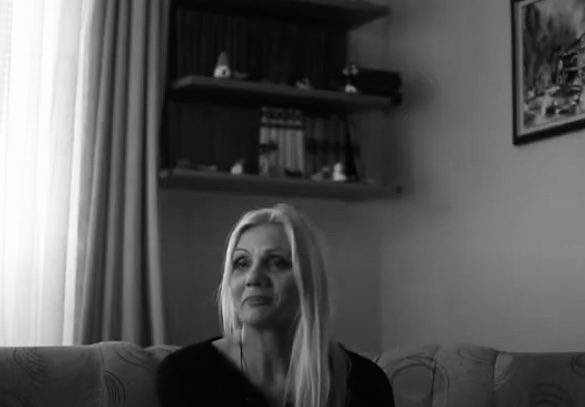 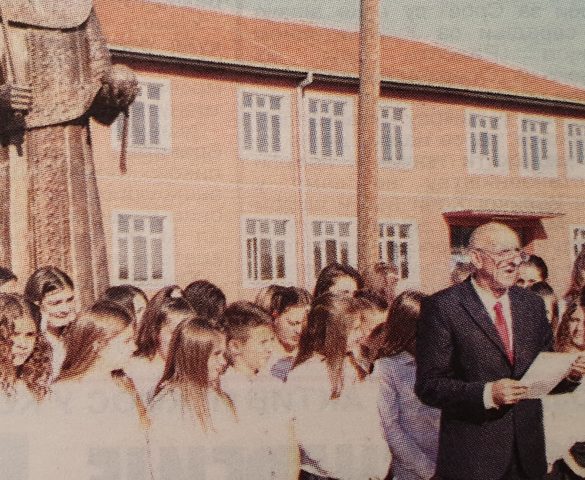 [M]y grandfather spoke Turkish and he was educated, he was in the Turkish gymnasium, he learned in Skopje, he was a very intelligent old man. They had, two of his brothers in that family, one of them dealt with farming, only farming, the other one with livestock, because back then, they had those stalls on the ground and he dealt only with, he took wood for winter and other needs, my grandfather only worse that ceremonial clothes, black and white with čakširima, moccasins, and he always was present during liturgies. […] What my grandfather knew, I’ll tell you only one anecdote, I’m sorry I couldn’t write this down sometime before he died, when he dies in ‘89, what he… after 19 years, the last 19 years, excuse me, somewhere in the period from ‘88, he became blind, he was blind for 19 years, my father was paralyzed, a stroke, and my grandmother was sitting on the couch, {shows in front} on the other couch was sitting my grandfather, from the sadness he took a kilogram of coffee beans and on the couch near his right hand he counted how many beans a kilogram of coffee has. I will never forget myself that I didn’t write in five sentences but it’s over now {raises his hands}. Then what, he knew exactly how many beans were in the coffee, he knew exactly how many times the mill had to turn to grind a kilogram of coffee and he knew exactly how many beans were in that mill (smiles).

[…] The history of the name is, as I mentioned before, my father was friends with Mahmut Bakallu until his last gasp, and he is the main reason why we have Elida. Mahmut Bakalli’s daughter is called Elida, so we didn’t know how else to reward him for all his help, and my father said, ‘We will name the pastry shop Elida.’ For him that was an extraordinary gift, a priceless gift… 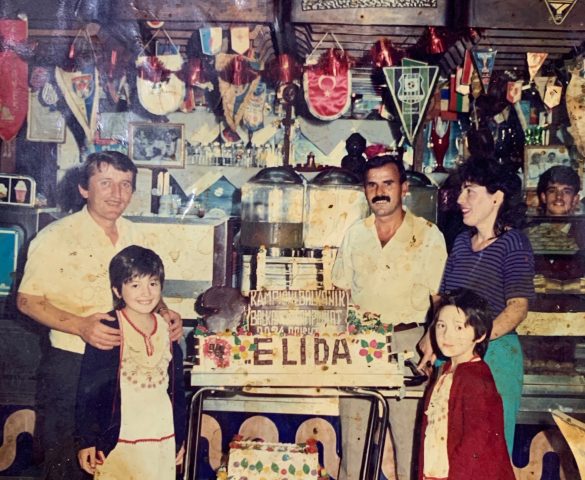 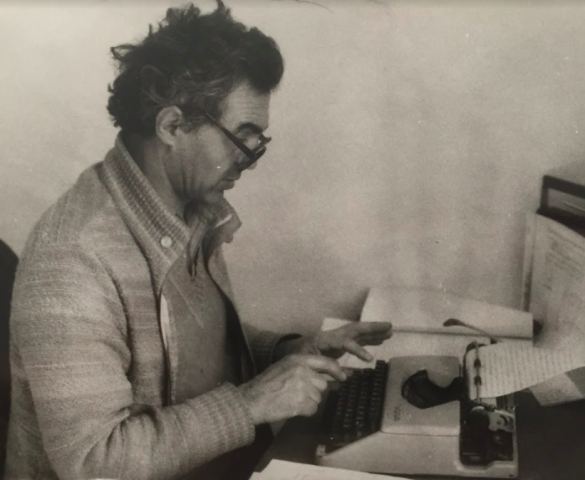 Imer Shkreli was a journalist at Rilindja, he would also write satirical texts. And he writes this satirical text about ‘The man with the foundational stones on his shoulders,’ and describes all this without mentioning the name of Fadil Hoxha. That became a political problem and he was expelled from the party because he ridiculed him. And now, after all this time, came Ismail Bajraj as the head of Rilindja, he died, and he was also very… Serious, but he managed to push the project. The investments were secured and construction of the Media Palace started, perhaps in the ‘70, ‘71. The data exists, but I can’t remember right now. It was completed in four-five years.

In the Old Bazaar, right where you would enter the street of ropemakers, there was a synagogue. At the Bazaar, other than the Turkish and Albanian Pristina folk, the Jewish people had shops as well. From back then, I remember personally two quilt making shops, a watchmaker, and I know two tailors as well. Karakušević Nasko, Jewish, he was a watchmaker. From the Prličević family, they are a family of Jewish descendants as well, they were tailors. These are some of the old craftsmen in that bazaar.

Where exactly was the synagogue?

And the Jewish families, they have left?

The Jewish families, based on what I know, there were many families here during the Second World War, and they were hidden by the old families here in the city during those times, protected. Some of them were captured by the German occupiers and sent to camps. And later, I think after 1947, when Israel was established, they slowly moved there. I remember right above Taukbahçe, the place called the Jewish Cemetery. Since it was not very far away from my neighborhood, we would go there often. There were maybe, I do not know the exact number, but around twelve large tombs, sarcophaguses. We would go climb above them, sunbathe lying there, on top of the stones. There were Jewish symbols and Hebrew writings on them. I do not know if that place is still there, I had heard that two to four tombs were left, and they had put it under protection. But I haven’t seen it since. 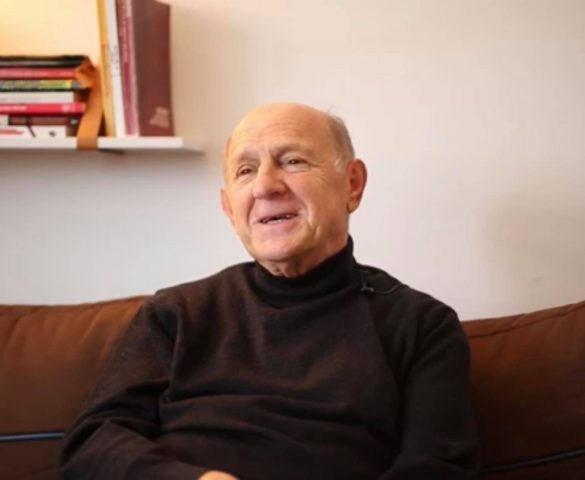 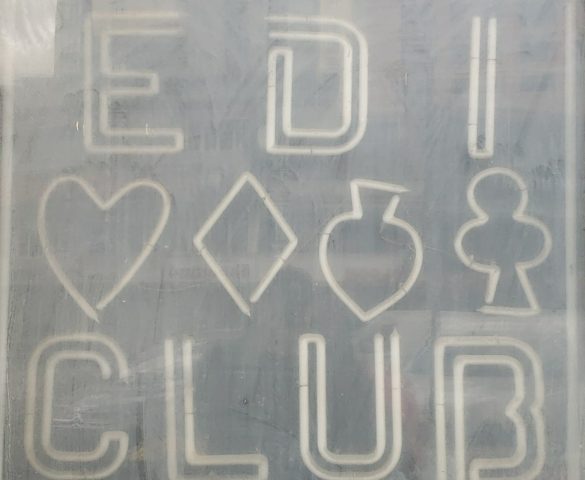 We had many games, many. […] from the most famous ones, the most famous game was Autofront, but Albanians called it Autron. Car game with a Ferrari. The lead had a girlfriend and they would go to Miami, or wherever you wanted, you could choose where you wanted to go. And it had a wheel, and when you were off the lane it would shake you (smiles). You know to give an illusion of reality.

Then there was Operation Wolf and Operation Bear, it had both names. But here, the customers called it the A47 automatic gun, it had a rifle. It was quite a big gaming machine and for the sensor of the rifle or whatever gun it was to work, for the sensor to work, to give results in the screen, you could not shoot directly at the screen, but there was a mirror, you had to do mirroring. […]

Maybe those gun games were a bit more popular in the ‘90s (smiles), but maybe we liked guns only in games. Mortal Kombat also, Mortal Kombat was as popular as Fortnite and similar today. Then we had Mortal Kombat. Kick Off was a football game, now you have FIFA a newer version. The games I mentioned were all two-dimensional.

Did you have your spoons, since you mentioned spoons, were they engraved?

I am telling you there was a special care, the reality of how it’s good to accept a… It’s very special that the noble inventory, how we used to call it back then, silver, noble, was checked by Serbian police every six months. One single thing couldn’t be missing. 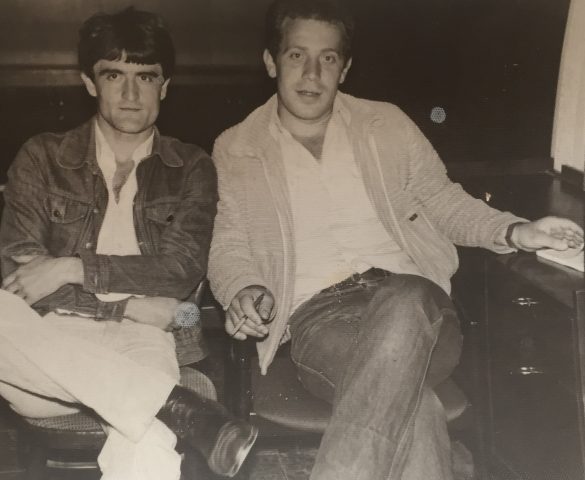 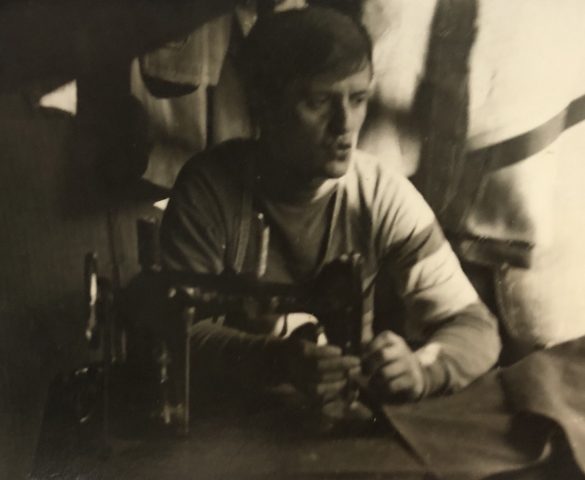 I remember Pristina very well because I used to work at the Çarshi [Bazaar], that even Çarshi of Sarajevo or Skopje’s Bit Bazaar was not as great as our Çarshi. But, unfortunately, at the time, the occupier ruled and they were making us take it down bit by bit and lose the aesthetics of our city, and they achieved their goal. But mostly our people achieved that goal. I’ve worked in this craft since I was 14 years old.

The city was… now, it’s a fact that it’s been built, but back then it used to look way, way, way much more beautiful than now. But, to be honest, even the people were better then rather than now, there was no hatred for one another.

My father really liked Turkish classical music, while he was listening to them all day on the radio, he improved himself and he started playing banjo. After the mandolin, they bought a banjo and he started playing along with the radio, he didn’t have a professional degree. Music notes and such, he picked up playing banjo and improved himself. So in those times the associations were established, cultural associations. […]

My father used to sing, he was a sound artist, he used to have a really nice voice, really nice. And while he was listening to songs on the radio, he was enjoying and learning. So while playing music together, he soon became very famous in this area. “Oh, there is a Rasim, Rasim, his surname is Rüşüt, but who is Rasim? Rasim is Salih’s son. Rasim, Barber Salih’s son, Master Salih, Salih’s son.” Rasim and Rasim Salih, that is how they started calling him, Rasim Salih. […]

There were more Turks living in Kosovo back then, unfortunately, a lot of them migrated. Then the [Executive] Council makes a decision in which Rasim Salih has to move to Pristina and establish an orchestra. The entire group of four friends, they wanted them to move to Pristina. Yes, no, yes, no, the final decision was that in the year ‘51 my dad moved here to establish the orchestra. 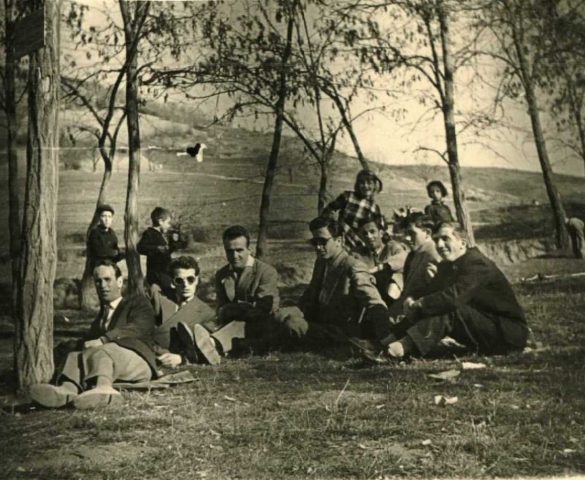