The Blood Feuds Reconciliation Campaign research is devoted to capture this unique experience, which developed in Kosovo in 1990-91, at the beginning of the repressive Milošević regime. By collecting oral history interviews with leading protagonists – young former political prisoners, the clergy of different religious faiths, writers and scholars – we aim to create an archive that will give voice to the different and sometimes inconsistent interpretations of the campaign, which were given at the time and later.

I have one remaining memory from the time I was part of the assembly, it is the celebration of the hundredth anniversary of the Prizren League on June 10, 1978. It was an amazingly organized event, it was great, I believe Prof. Dr. Pajazit Nushi who was also the minister of culture and education was in charge for the event. We collaborated a lot at that time because we needed to collaborate, because renovations were taking place in the League’s building. I remember there were some poor people living in that building, then apartments were given to them, the building near the League was renovated [the current museum]. All that took place for the hundredth anniversary, Agim Çavdarbasha sculpted the statue of Ymer Prizreni [and Abdyl Frasheri]. I remember that Albanian opera was Goca e Kaçanikut [Girl from Kaçanik] of composer and professor Rauf Dhomi was first performed in Kosovo on that occasion. The ceremony took place at 8 PM in the evening in the sports center, there was direct broadcasting of it all around Yugoslavia, from Slovenia to Pristina, it was a very well-organized event, but then after ‘81, they started to fade away…

Activist of the Reconciliation of Blood Feuds Campaign

An old man was almost close to death. And he did not receive us inside his house. He chased us with a stick. He said to his sons…. We tried… we usually insisted, we kept insisting  and got inside. He had a big [national flag’s] eagle {shows with her hands}. The eagle. Quite a patriot. During our talk and the ongoing talk, I got really upset. I said to him, ‘Remove that eagle [from the wall], you are not a man!’ I got the eagle down and stepped on it, I said…. Than he chased me out, and never received me again. 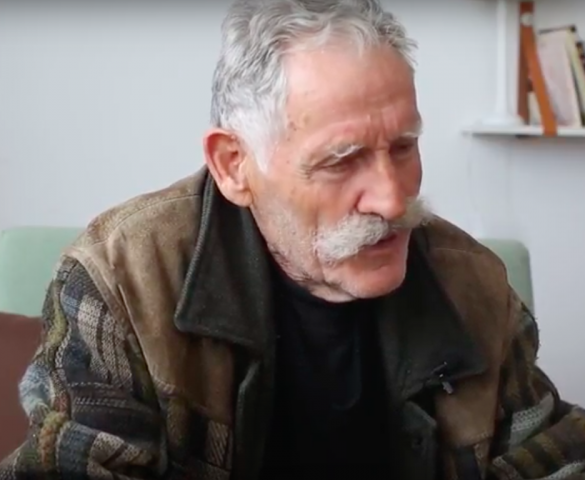 Professor of Albanian Language and Literature

They began, the perpetrators began to be identified. The perpetrator was imprisoned together with his brother […] he went to Niš. One, one of the perpetrators died in Niš and the other was released. My father with his friends started to take revenge even before we were born, and he avenged my mother’s blood. It was at that moment that I started feeling in my soul that feuds, brothers killing each other… Look, the ones who attacked my family, who executed my family, let’s leave that to history. They were really harmful to Albanians. But they say that no one ever fired a gun to avenge their mother and their fathers like my father did, a positive gun. But then they began, I, in my soul, I was a student of professor Anton Çetta and many others, I knew him perfectly well, because when my father returned from prison the professor came to visit my father in Drenica…He took stories, various historical and political anecdotes, he collected all that wisdom, he constantly came to Drenica.

…a woman somewhere in the surrounding of Istog, her father had been killed, and she did not want to forgive, the family yes, but she didn’t want to, the case was terrible. Her name was [Besa], she gave her word, she gave the besa to her father to not forgive, to avenge his death. So, we went the next day but she did not forgive it. When I returned home I said to my father, ‘Dad,’ I said, ‘I want to ask you something.’ My father said, ‘What?’ I said, ‘I have a question,’ I said, ‘for example, God forbid someone killed you,’ I said, ‘and you asked me to avenge your blood, and I promised you to take out the blood, and now, the people asked me, for the sake of the Movement, to forgive your blood that I promised you to avenge, if I forgave it, what would you say? Were I to forgive it, or were I to keep my promise?’ He said, ‘When it concerns the national cause,’ he said, ‘never keep a personal promise. Personal promises are broken for the sake of the national cause. Everything,’ he said, ‘not just me, but if the whole family were killed, if the nation asked for it, if the national flag asked for it,’ he said, ‘not only forgive it, but give your life for it. So,’ he said, ‘this is my answer, for the national cause and the flag.’

So, more or less I was touched, I thought why that woman is not forgiving it, so the following week she already agreed, she agreed to forgive it and we went. Afterwards, after two weeks we went and she forgave the blood, but I remember the inner conflict of that woman, I will never forget, she, her braid. When she entered the room, we were crying more than she was crying. Terrible, terrible! 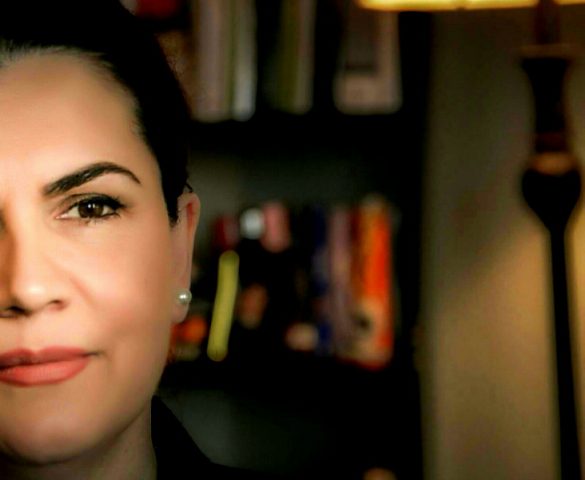 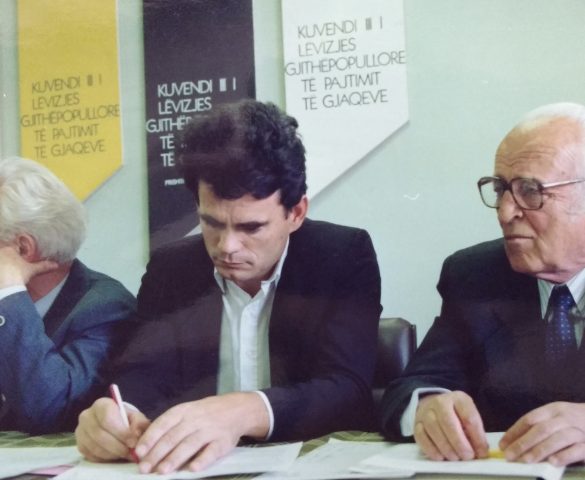 Rector of the University of Pristina

The families knew me and of course it was hard for me when I heard that there were cases in which  they forgave the blood of their son without knowing who killed him […] They forgave the unknown assassin and they used this, ‘Since Marjan forgave three blood feuds, I have no words to turn you down.’

So, this is something that at the same time made me feel good, but at the same time made me feel bad, because he forgave. For them it was the most difficult case, because for a person every problem of theirs is the biggest one. However, the comparison of forgiving one blood with the heavy weight of forgiving the blood of my three brothers, had an impact.

The mediations began. A sentence I seem to never forget is when Anton Çetta asked Haxhi, our paternal uncle, he said, ‘How old are you?’ He answered, ‘Eighty-three.’ He said, ‘Inshallah, I manage to live that long.’ Then a pleasant mood reigned, you know. So, they stood up and he said, ‘Who has the intention’ he said, ‘to reconcile, stand up,’ and they stood on their feet, embraced one another there […]

The very second we embraced and sat to have coffee, their children ran rushing yyyyy {onomatopoeic}, they were on the second floor and they ran, they went running to our garden and invited our children to play ball all day long.

That was very interesting, I thought to myself, ‘Ku-ku, what had become of us, how come we never thought of the children.’ It happened that our children and their children were in the same classroom. When they ran and played, they had to stay on one side or something, they said, ‘We stood still trrak. {onomatopeic} So it doesn’t come to…’ You know, those moments, they were more or less difficult.

The difficult part was to maintain [the peace], I mean to keep it that way up to reconciliation, us and them, to not come to a more difficult conflict or a bigger tragedy. 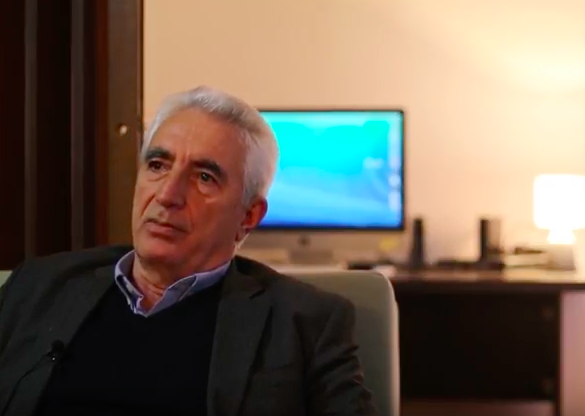 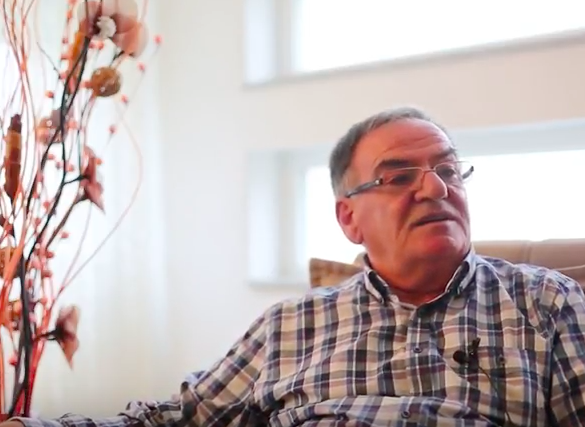 I went [to the mountains] with my maternal aunt, and we stayed two days, on the third I returned to the plains with my aunt, arrived in Rozaje, from Rozaje to continue for Peja, for the village. In the morning my aunt was at their place [her other sister’s family] and when she came back, she came back crying. […] My aunt says to me, ‘Go back to the mountains.’ I said, ‘Why, how can I leave you? We are going together to the village, to the plains, to Peja.’ ‘No!’ She said, ‘You go back because he told me,’ the killer [her sister’s son], that, ‘the sun will not rise before I kill one of them or both.’ I was surprised and I said, ‘Aunt, why haven’t you told me while at the mountains?’ And I took off. […] When I went to the mountains, when I arrived up there, I found him [my brother] dead, he killed him in the presence of my mother.  And his brother’s son  [the killer’s nephew] had bruised his neck as he held him from behind, and my mother tried to stop the killer’s nephew. He had tied his hands and taken out the gun and shot him with a bullet in the heart. He had fallen on top of my mother and mother pulled herself from under him with difficulty. When I arrived, I found my mother standing by his head. And the police came and would not let me take the corpse.

Violet said, ‘Come and see the reconciliation of a blood feud,’ and in the end I said , ‘Alright, let’s go.’ I gave in, you know, because she insisted. When I arrived in Skenderaj, it was March 1990, and there was a gathering, not that big, and I noticed something, I did not understand what the blood feuds meant because I did not know Albanian well, but I understood that it was important by reading people’s emotions. 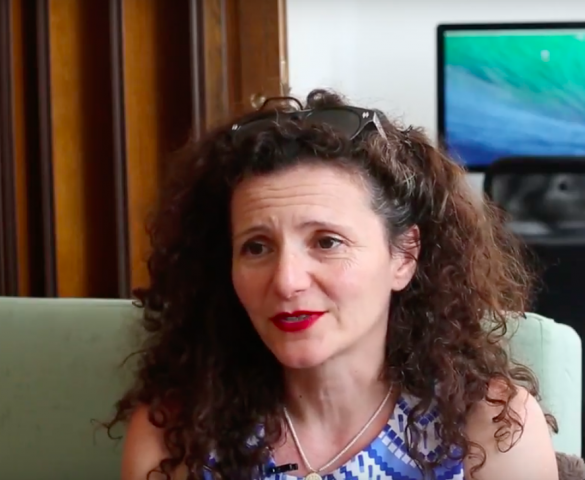 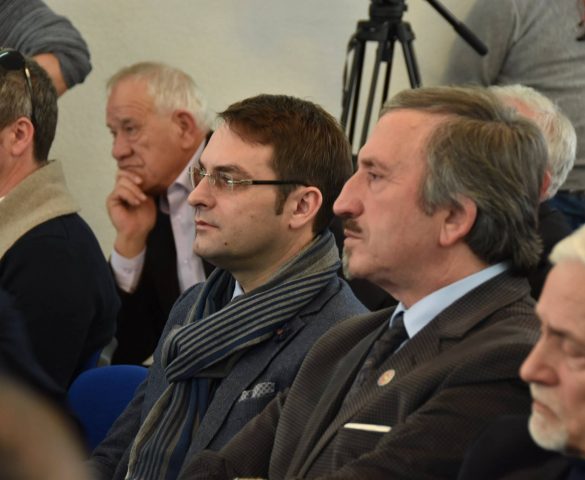 And then we met Nimon who said, ‘We have to meet someone there.’ There was Hava Shala, Flamur Gashi, Myrvete Dreshaj, Zoge Shala, Adem Grabovci, Rexhep Kelmendi, Lulzim Dreshaj, Ibrahim Kastrati and I guess two or three others, Adem’s brother and I don’t know who else from the students was there. And some of us met Nimon, and I said, ‘The entire shop is available for you.’ We opened it in order for people who wanted to notify us about a feud to come there and bring [the names] on a piece of paper. They mainly brought them to my shop, but they also gave the papers to other people or other activists. People in need who were locked in or in feuds with their relatives or other people, of course they needed to be set free and reconcile because the tradition exists that they are only allowed to move under besa.

In another case, in Greenwich Connecticut, they called the police, they called the police and sought the arrest of Anton Çetta, and the police really acted that way because they did not know what the problem was, and who those people were. I was there, the person who was there tells the police the reason why they went, and they say, ‘What?’ He says, “Yes, because of this man who lives in Greenwich, a  family in Kosovo is  locked up and  does not dare  go out, nor take their children to school or do anything.’ And they say, ‘What is this?’ And ask the one who had asked to arrest Anton Çetta. They say, ‘Why did you call us? These men are peaceful, it is not what you said, that they came to threaten you.’ The person who accompanied [the delegation] says, ‘No, more [man], he didn’t come to threaten, because this is a University professor, while the other is a very well-known lawyer in Kosovo.’ Bajram Kelmendi was with him. He says, ‘They did not come to threaten, but came for this reason.’  And they left, and we did not have any agreement with the man. He is from the Lekaj family, from the municipality of Deçan, the blood feud was there, and it was there where the Reconciliation began, when Hava Shala started [the campaign] with her group. 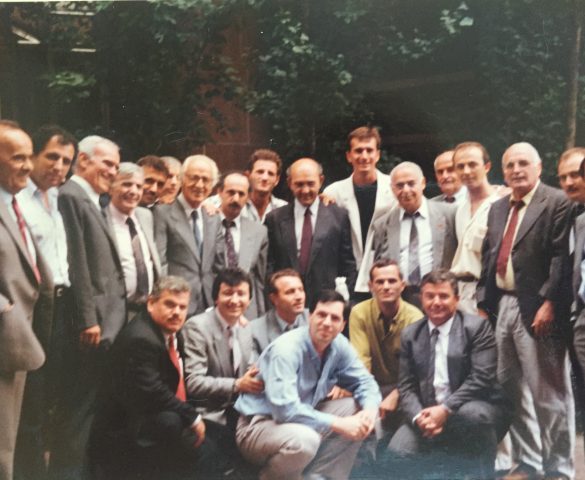