The Trepça Miners’ Strike began on February 20, 1989 and ran for eight days. Miners demanded their constitutional rights and protested against the abolition of the autonomy of Kosovo, as guaranteed by the 1974 Constitution of the Socialist Yugoslavia. Miners’ labor culture was quintessential in the ideology of Yugoslav socialism. Because mining was such an important dimension of the country’s economy, when the miners went on hunger strike, economic life nearly shut down.

The oral histories with miners are intended to place this event within a broader historical context, as well as capture the human dimension and present lesser known stories that happened in between.

The interviews were produced in partnership by ForumZFD Kosovo program and BMZ. 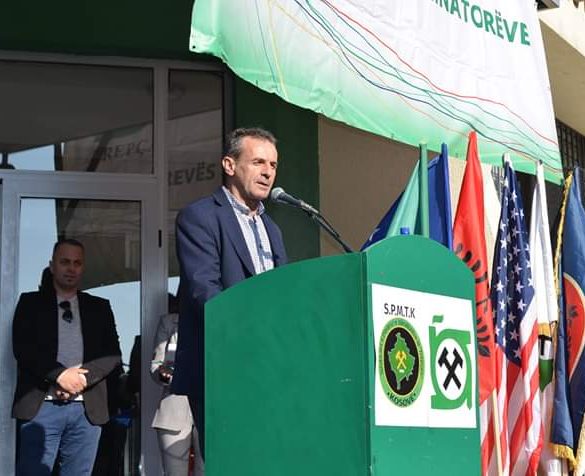 Trepça at that time, I am talking about 1924, the research started by the English, yes. And in the year 1927, they began working on the mine, while in 1930 the testing production took place, daily production was 500 tons. The method was exploitation, classic methods, very difficult during which there were many accidents, many people died. We even have the statistics of the years ‘48, ‘49, ‘50, throughout the year, twelve people lost their lives at the mine. The cause of it was safety measures, they weren’t at a satisfactory level and the work conditions were very difficult.

Now the time during which my grandfather worked, you know he worked somewhat until ‘50s. In the ‘50s, he had the opportunity to leave jobs and he did because of the poor work conditions and the work in the mines was really hard, there were no micro-climatic conditions, air conditioning was weak. The work was physically demanding, the loading was done by shoveling in the trolleys. The trolleys were pushed manually. This is probably something that pushed him to leave that job because he could not handle the hard work in those difficult conditions.

This was during the Second World War occupation, it was forced labor in the mines. It was wartime and really no one really asked them much, they were forced to work and they did work. […] Yes, actually [Germans] forced them at that time, and you either had to join their army or work in the Trepça mine. To tell you the truth, our family was also politically persecuted by the Communist system. […] Perhaps that is the reason he left the job, such pressures he could not handle, our family was known as a Ballist [National Front] family.

It was a point in time in which the miners thought that something good was achieved and that their demands for resignation [of the politicians] were met, and that those were received well. A curfew was imposed, a situation in which you would see people of state security roaming around. The police wouldn’t let people gather, they would mistreat them in different ways, interrogating them, ‘Why you this, why you that?’ In this way they started to tell you the truth.

After that, they gave to workers these decisions, around 1400 workers, the workers were punished with one to three months [of jail time]. I recall that after the strike, for four months I was… I, together with some colleagues, with Xhafer Nuli, with Enver Kelmendi and… we were four months without work. After four months we were kind of called back to work. But the production was going down, the political situation was unstable in Kosovo, so bit by bit they fired us from work. On August 8, 1990, when the first shift came to work, the police were at the main entrance. The third shift got out, and the first shift was not allowed to go in. 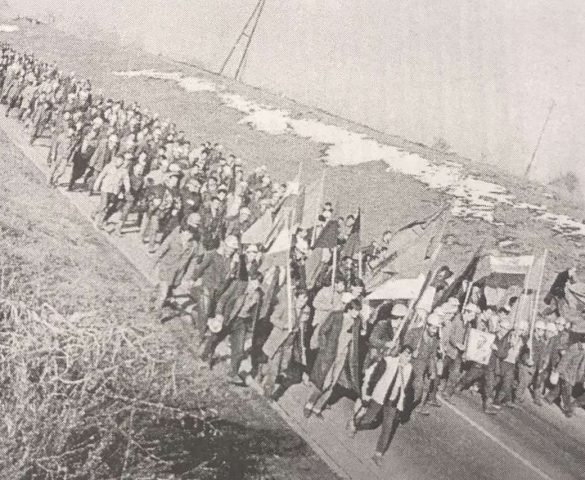 The march to Pristina, the Miners’ March on November 17, 1988, the march began from the mine, from Stantrg. That day, I did not go to work in the morning because I sent one of my children to the doctor. A colleague of mine called me on the phone and said, ‘Come cuz the workers want to go to Pristina.’ I went to join them. […]

Barefoot and poorly clothed in the work uniform, when I saw them I didn’t think they would make it to Pristina on foot. ‘Don’t go boys, you won’t make it to Pristina on foot.’ Swear to God, I said, ‘Let’s try and do something, something, because in Pristina…’ A worker came close to me and said, ‘You mean it?’ To tell you the truth I enjoyed authority among them. He said, ‘But Burhan [Kavaja] says we should go.’ ‘Did he say that?’ ‘Yes.’ ‘Then go, go!’ I said.

[…] Now the workers had to confront the police. I said to some of my colleagues, ‘Let’s stand in front and lead the workers, because what if… now when they confront them we will calm them down and ask them to stop.’ Because we pushed from behind and broke the police chain and we continued the march. But this happened quite fast because there were some Albanian policemen and the police chain was broken. They did not respond and were not violent with us. They abandoned the police and joined us at the Sports Hall in Pristina.

I remember Burhan [Kavaja] as if it were today, he came out, ‘Where are you going?’ ‘To Pristina’ ‘You’re going to Pristina, I will come to Pristina with you.’ I know, I remember his words. And we walked on foot, there were attempts from here, by the security, there were people here that were from the security, civilians, police came and tried to stop us. But, when they saw they wouldn’t stop, they left on foot.

[…] They said, ‘Go back!’ Someone sent them from there. And there were two cordons of police, we went through the fields and continued [marching]. So, the police didn’t intervene then, they didn’t intervene, they tried to stop us. But at that point, people started joining us, we became greater in numbers. Back then, the system was such that you had to take Tito’s photograph with you, and we took the Yugolav flag and our flags. So, in that way, in a way, we tried to show that we aren’t against anyone. Because back then, if you protested, they would say, ‘They want to take down the country, they want to take down Yugoslavia.’

[…] We went there with work tools, with boots, for some, they didn’t fit while walking. I’ve seen workers taking them off, the boots hurt their feet, because when the boots are bigger, they hurt if you walk for a long period of time, they would take them off. I saw them walking barefoot. They went there, guided us to a hall. I know they asked for Azem Vllasi, Kaqusha Jashari, those who… these… we heard then that they wanted to discharge them and we asked for their protection, our officials, and we asked for the resignation of Rrahman Morina, Hysamedin Azemi, and those who were in power. 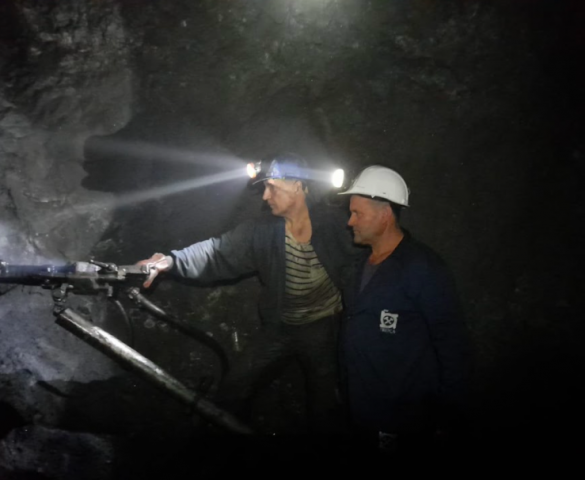 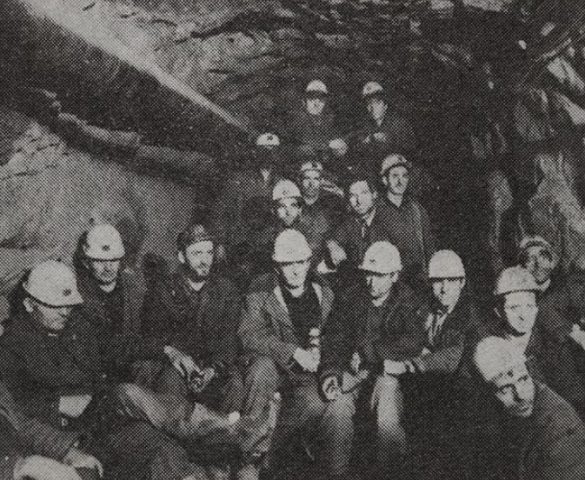 [The miners] were striking at all levels, the eighth and the ninth. We would go up only to bring in a delegation. Upfront we would consult them, ‘This delegation wants to visit, do you want to receive them or not? No, no. Yes, yes.’ We would accompany the delegation to the ground level and continue [with the strike]. All sorts of people would visit, all sorts of aid we would receive, we received food. ‘Do you want money? Do you want gold? Do you want…’  a poor man offered his cow and tied it to the mine. For the miners this was too difficult… and they did what they did and betrayed the miners. A decision in three envelopes stamped with the red stamp of the [Provincial] Committee, and they read the document that stated that the three leaders resigned. The miners ended the strike, but we had to get them out of the mine at night because, during the day, they would have lost their sight. We got the miners out and they started taking actions against the miners. The leaders were imprisoned, then the workers. […] They were being imprisoned. Then Aziz Abrashi was imprisoned, later Burhan Kavaja, then Azem Vllasi, and fourteen others or more. But what’s interesting is that they were very united while in prison, no one turned against each other.

The strike began. Miners of the first and second shift started coming, they started gathering, there were around 1,300 miners. I could organize 20-30 miners and not have anyone else. […] in that moment when the strike began, we had 2,500 kilograms of explosives in the mine, which could have caused a grave tragedy.

[…] The second day began, I was able to organize meals without having to go outside. The miners had three meals a day, so that it would not affect their health, [that happened] only when we went on hunger strike and that was something else […] the second day got the attention of the media, TV and radio stations, newspapers arrived and began reporting from everywhere, so we decided to let in only Kosovo journalists and for the rest to hold a press conference.

And that’s what we decided. Until we got into a situation where ministers from federative organs proposed to give sedatives to the miners, so they would get numb and wouldn’t be able to reason and we would get them out. Of course, I wouldn’’t allow something like that, and I didn’t allow it. So, there were propositions like that also. […]

But, what isn’t known to the public is that the Reconciliation of Blood Feuds Campaign started in the mine. Blood reconciliation started there, with the request that, ‘You outside reconcile, we will do our sacrifice here.’ There were cases when I couldn’t visit them all, because the halls are 200 kilometers long, they would say, ‘Director, you didn’t visit us, we are very desperate, we are in a very bad condition’, then, ‘Please, visit us too.’ 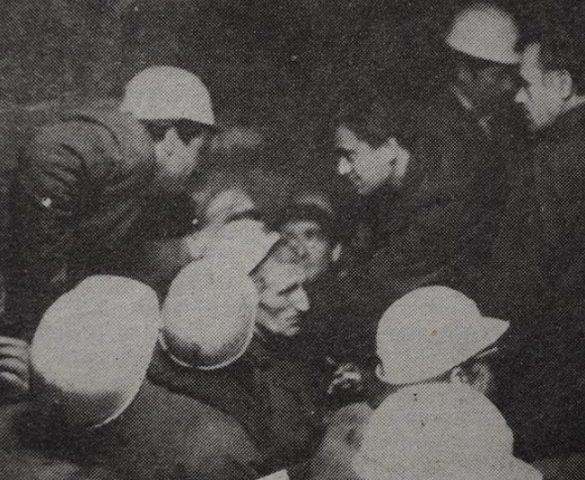