This series of interviews documents the lives of artists and art professionals who worked in Kosovo and were part of the art scene in the 1970s, and steadily gained recognition in the Yugoslav art space over two decades. The political context that gave rise to the visual arts came to represent Kosovo’s golden age in Yugoslavia. This period of great prosperity seemed to be at the core of institutional memory, including that of cultural institutions. It is no wonder that the Gallery of Arts in Pristina, today the National Gallery of Kosovo, was established in 1979, becoming the first arts institution to define how works of art would be displayed and communicated to the public.

The oral history project with Kosovo modernist artists was initiated in late 2016 by the Oral History Initiative in collaboration with the National Gallery of Kosovo. 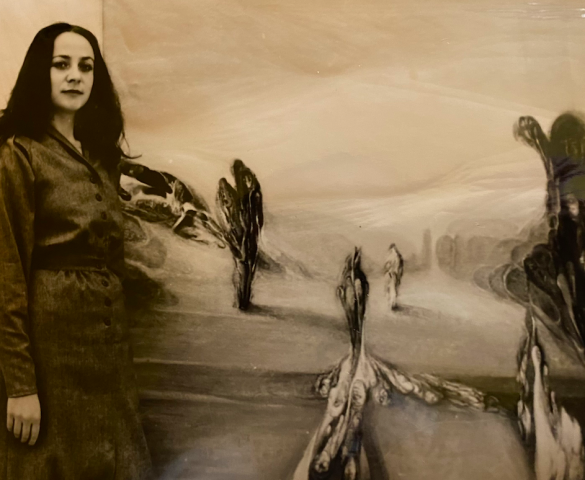 The first day was… the exhibition space was really big. At the time, on the right side of the entrance, I remember this great hall. I wondered, ‘What takes place here?’ For example, when we received the artworks for the exhibition, we would prepare the documents to ship them. Of course, they went through the customs, but we used to have the customs service that would bring the artworks to the Gallery. So the customs procedures were simpler. Then, of course, we installed the works. We were a very small team of six and all of us would get involved in the exhibition production. […] There was the director Shyqri Nimani, Engjëll Berisha was the curator, we had an accountant, it was I, we had Rrahman the technician, and a cleaner. So, this was the core team with which we started. The Gallery was positioned so that, you know, we always had many visitors because the environment was such that it imposed it on you, people that went to the mall would drop by. Behind Boro Ramiz Youth Palace was the marketplace, and people that went to the market would come with their grocery bags directly to the Gallery. You know, we had a lot of visitors from all walks of life, not only artists. It was quite pleasurable, a great experience, something different for me. I liked meeting artists, I was young at the time and they were older and I didn’t even know most of them. They had to introduce them to me who is who, and for a long period of time I worked hard to know everyone.

I mostly find inspiration in nature. I take fragments from nature and try to live through them, live it with my heart and soul, and draw it on paper or paint it on canvas. For me that’s what’s important. […] For example, I have the Crops Cycle. Why crops? Crops because our people suffered from malnutrition, suffered from malnutrition. Then I have the Twig Bundles. What are the twig bundles? it’s a tool which our farmers always used, they used it to even the land […]

Then I have The Fireflies. What are the fireflies? The fireflies are the messengers of spring, the first sign that the crops are ready to harvest. Then this is how we knew that it’s the time of the harvest, and that’s what fireflies are to us. Like a fenix cik cik {onomatopoetic} sending out the message that somewhere the time has come to harvest. Like that. Then I have The Memory Flowers, the place I was born in, Llukar, though I spent more time in Pristina. The place I was born in is covered in flowers, snowdrops, violets. What wonderful smell violets have, it’s incredible, as if it were a perfume. 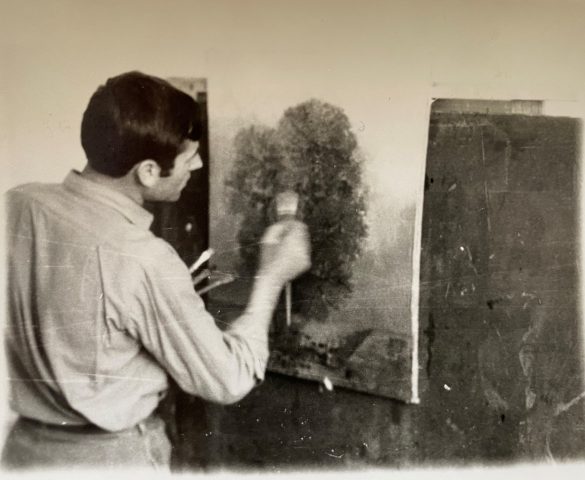 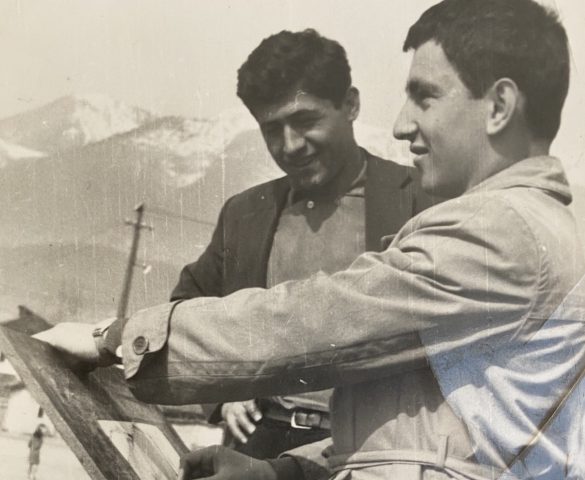 … when I went to elementary school, when I explained this to others, they wondered, ‘What is that?’ We called it tafte [board]. Tafte. It was an A4 plaque with a wooden frame, thin like a blackboard. On one side, it had no lines, on the other, it had lines to guide your handwriting. It had wide and narrow lines, wide and narrow. One side was empty, it was black entirely, and, on that side, we would do our   in-class work and continue at home, written with white chalk that would scratch the surface, it would leave white or gray marks. And that was our school notebook, that was all we had, what was in our possession. […] The worst that could happen to you, while you were going to school, a friend, well, a malicious friend, would come from behind and erase your homework and you would have to go to school without homework.

Tajar Zavalani translated that [Mother by Maxim Gorky], he understood what communism is and left, then he worked at Radio London. My mother would listen to it a lot, ‘Communism will end today, tomorrow.’ One is inclined to go from one extreme to the other. When we returned to Gjakova… our property was confiscated and my dad, dad, dad did not, he left, he never… he thought that he would be safe in Gjakova, that he would not have to leave his family. From Fadil Hoxha to Sahit Bakalli, they were his schoolmates and worked together as teachers in the Gjakova Highlands.

We met with Sahit Bakalli, before meeting him… and Sahit Bakalli said to him, ‘Look Shaban, you cannot spend the night in Gjakova. We cannot protect you from Serbs and Montenegrins, you are the heir of Jakup Ferri, Hasan Ferri, the brother of Riza Ferri, Shemsi Ferri that have led the war against the partisans, and you also were with them. You have to leave and go to Albania, in Tropoja, where you used to teach, where your in-laws are. This tempest will pass and you’ll be alright somehow.’ He followed him out of the town, my dad left and we stayed.

[…] sometimes when you are lonely, alone, if one person knows two words in Albanian, you think it’s your brother. He would call my mother sister and she would call him brother, and they weren’t even from the same village or city, but from the Gjakova Highlands. Pashkë, Uncle Peshk [Fish] I would call him. He was unlettered, but he smoked like an aristocrat – it seemed to me that way then –  with a pipe. My mother sent to him the clothes that she made with the loom to sell and he sent her off with a couple of lies, ‘Ms. Hatixhe, I heard on Radio London yesterday night that a week will not pass and communism will end.’ And that lie would amuse my mother for a week. Next Monday, he would lie to her again, and the years passed, we grew up. 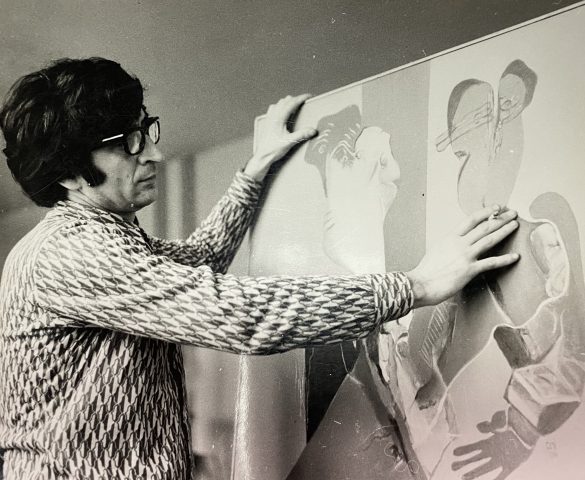 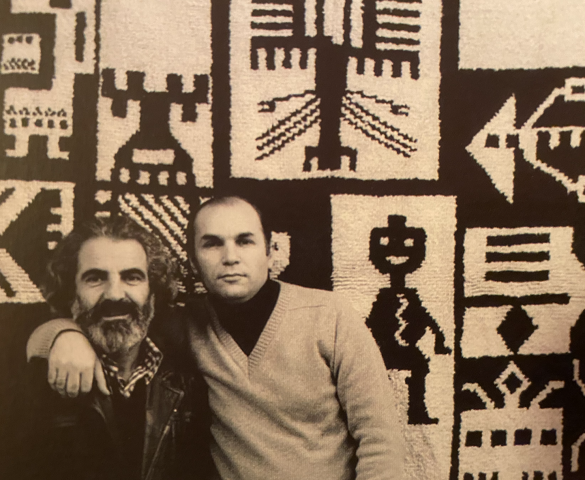 We founded the University in 1970, that was an extraordinary, big event. Then three-four years after that we established the Faculty of Arts, which was called the Arts Academy, and started with the department of painting, graphics and graphic design. […] The generations in which Kosovo had invested, returned, my generations and a generation older than me started returning to Kosovo which was a very good thing. And then the Kosovo institutions started being established. You know which ones? The theatre… even though there had been some of that before, but it started to get a strong character and get better established, the Kosova Filmi [Kosovo Cinematographic Center] started being constructed, then the Gallery of Arts, then Shota [Folk Dance Ensemble] and so on. I mean, Kosovo started taking the shape of a state, I mean which had to be so, be it by peace or by war even though the latter happened.

This is the master who was driving his horse car and when I saw him, I stopped him and said, ‘Can you come to my atelier so I can make a portrait of you?’ ‘Yes,’ he said. And I worked, and these hands, I mean he is tired, and his plis, the color of his plis is not pure white, but I did it like this because he had worked and he is tired, and the color is like that because of the dust. And when Jusuf Kelmendi saw this in my exhibition, he said, ‘You can see it in this painting, these hands, tired… a really, really good portrait. 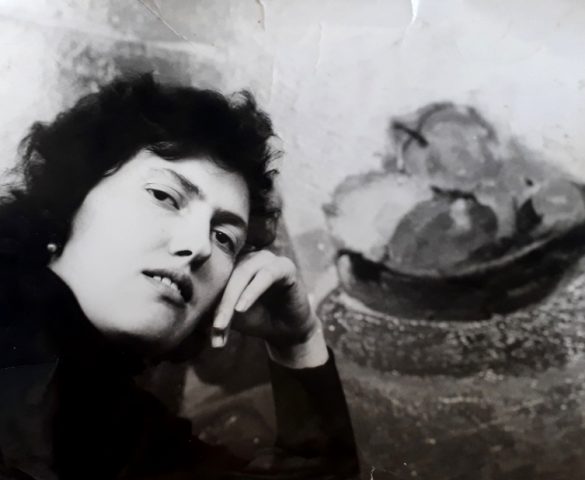 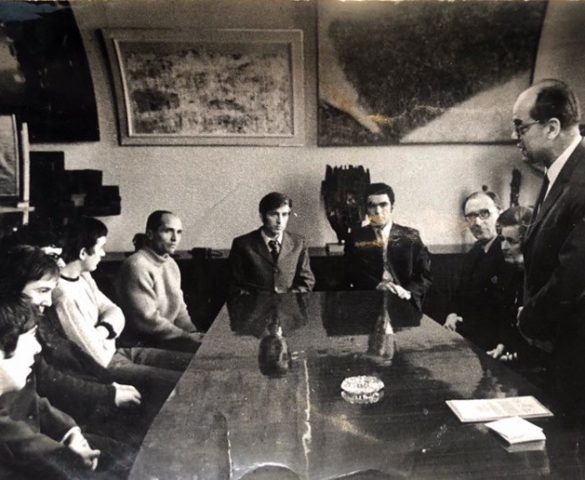 …I had a preoccupation, how to understand living nature, the human figure, limbs, the physiognomy of the human head… I would walk around in Peja’s markets with a purse on my shoulders, some typewriting machine paper and some other helpful tools. I mostly went to the Green Market. From the villages on market days they would bring the agricultural products in some big baskets and small full of agricultural items.

Owners themselves were wearing traditional clothes quite usual for the ‘50s, ‘60s. And I, quickly filled with joy started drawing quickly that beautiful view. Then I often went to the bus station, it was more difficult for me to draw there because the travellers would always move. But, a little based on my memory and a little based on nature, the drawings I did were a sort of croquis figures.

My house was across from the Paper Factory which was called Lepenka. Since they processed paper, I would find various books in their trash, and one day, by accident, I found a book on art. And I would collect all those books without being aware of or knowing anyone at those early times, that period. Then I fell in love with art, I mean, as I was studying its visual forms. My art teacher, she had finished exactly at that Arts High School in Peja. And so, in conversations with her, she said, ‘You could go there. I see that you are talented.’ 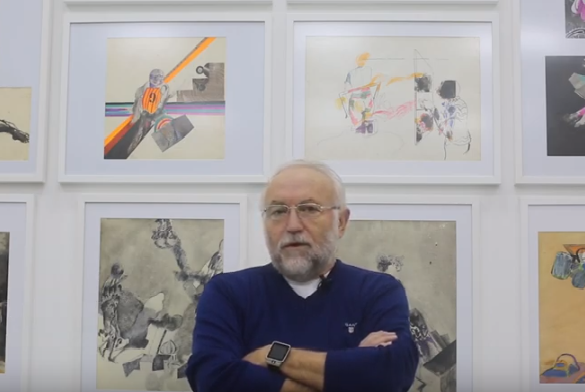 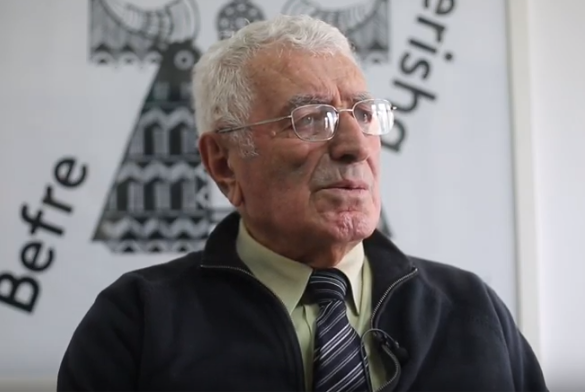 I wrote to him, ‘I heard you are very popular, I’m a student studying art. I’m from Pristina.’ I told him everything. And he answered, he answered after two weeks or so. He answered in a way that I thought he didn’t even finish elementary school, he didn’t even speak proper Albanian, he could not write and the letters were like doodles, you know I thought so that’s how artists write.  And now I had a dilemma if I should write back or not, he was not worthy (laughs). The mind of a young man! I said I’ll answer out of courtesy. When I answered, within five, six days he sent me a package with exhibition catalogues. Catalogues that showed that he had exhibited with Picasso, with Matisse, then I realized who he was.

…Josip Broz Tito, Yugoslavia’s president, he had a place, Brione in Croatia, it was there that he took all the artists. Even the big artists had their studios, this Zdenko Kalin had his studio there, whenever he wanted he went there. He was a great man, I’ve learned a lot, he was, now I know, Neoclassic, old Neoclassic with old standards. When I went there he, he went, he started to get ready for retirement, he was in that age, he smoked Yugoslavia cigarettes […] I’ve learned a lot from him, I’ve learned things you can’t learn in art, you can’t learn some things, there are some things that are not written in a book. Some things are written, in art they don’t write, you have to see it. You had to see him when he went to make a sculpture, Zdenko Kalin, when he was immersed in his work. I’ve learned more from that minute, I’ve learned more than from other things, more than from books I’ve read and art is… it has its secrets. 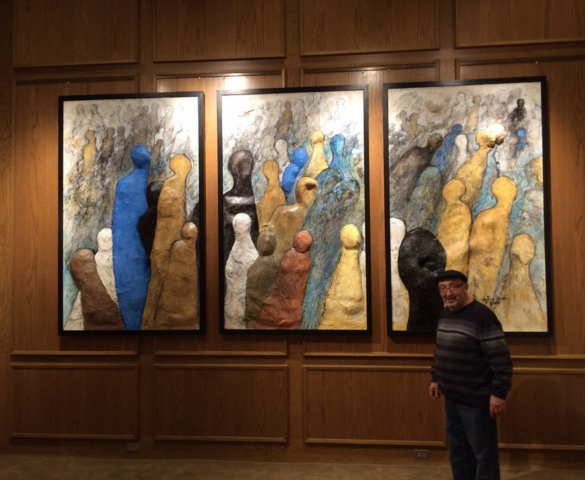