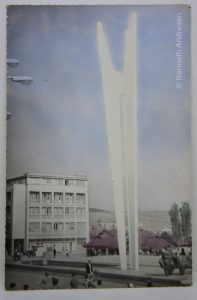 We begin our exploration of the postcard collection, Return To Sender: One Hundred Years of Postcards from Kosovo, by looking at postcards of the memorials to the Second World War, which were, and are, rich signifiers of national identification, time and space, as much as all the other, newer war memorials.

In the 1970s, there were 400 memorials to the Second World War in Kosovo. After the war, they had begun to spring up without a plan, ranging from plaques to cemeteries, commemorative fountains, buildings, and busts. In the early 1960s, a new crop of monuments, planned by the regional Yugoslav leadership, was designed by renowned artists who promoted an abstract, modernist aesthetic. Here we focus on three of them, which held a greater symbolic importance: first, as memorials to the 1941-45 war of liberation, in which, differently from when “the people of Kosovo fought separately […], Serbs, Montenegrins and Albanians and Turks fought for the first time together, thanks to the working class and its avant-garde, the Communist Party of Yugoslavia” (Kosovo/Kosova, 1974, p. 479); second, as architectural highlights and aesthetic signifiers of Kosovo’s leading cities.

The wave of political events that led to the Kosovo crisis of the 1990s until the 1998-99 war, was not kind to the Second World War memorials: they were destroyed or rendered invisible by neglect, as symbols of Socialist Yugoslavia’s ideology of supra-national unity, which no longer held – in fact, it was reviled by some groups. The postcards in our possession function as an archival source: they restitute to public view monuments that have been destroyed or fallen into disrepair, the ruins of the top-down, modernist development plan of Socialist Kosovo, by presenting them in a context that no longer exists.

We look at these memorials without nostalgia. Their distance from social-realism, as modernist works that has often been considered a high artistic achievement worth preservation, does not make them less ideological, nor disconnected from their political context. Their location, physical structure, time of building, who built them and why, their subsequent uses, in sum, everything that happens from when they are “born” until they “die,” including the memories they anchor, is meaningful.

And what the postcards provide us with are traces: of different possible representations of physical or symbolic spaces organized around the memorials; of those who produced the postcards themselves; and even of a past social and political context, which we can summon from the fragmentary, enigmatic texts written on the back of the cards by people we know nothing about, but nevertheless texts that come to us from a past whose memory we can recall.