On Human Solidarity during the Reconciliation Campaign: Eleventh Story

Two additional stories: This is the eleventh story about the 1990 Reconciliation of Blood Feuds Movement. The tellers are Raif Musa and Valdete Bajrami Musa, husband and wife, information technology professionals from Ferizaj, who were activists of the Movement. 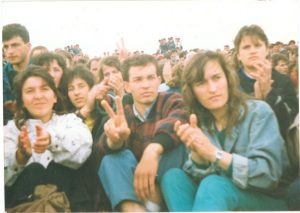 It has been a long time, people tend to forget what happened, and it was not easy for two years, it was not easy for two years. We covered all our expenses, our families supported us because they covered all the expenses, each of us was supported by their family. We would collect the money and pay for the cab or fuel, we constantly had a car available. And an activist who worked at the Council with us, he got involved later, he came to notify us about  one case, you know, and he saw us, we would buy bread at Mikel’s Bakery,  hot bread and ate it plain, we loved it, when he came and found us eating, he said, “Can I ask you something?” We said, “Yes!” He was older than we, he said, “There are some young girls and boys working on reconciliations, where can I find them?” “You’ve found them. That’s us.” “What are you doing, are you eating plain bread?” “Yes, we are, and we love it.” “Wait,” he said, “a little,” he went and bought kebab and brought it to us, he said, “I,” he said, “have three brothers living abroad, in Austria, for as long as they are there,” he said, “You are not going to eat plain  bread.”

You know, he was a very good person, he helped us a lot because he gave us his car, he gave e a a copy of the car key because I was the only one who had a driving license at that time, and he would fill it with fuel and leave it in front of his house’s doors, he would say, “When I have no time to come with you, you are free to take the car without even asking.” His mother was old, at all… you know, we would just park the car when we came back and tell, “We left the car.” “Oh, you don’t have to let me know,” he said, “Take it, get things done.” Because he couldn’t always manage to come, because he was working as a carpenter, he came whenever he could and when he could not, he would always give us the car, we had that car that was available as well as the car of professor Ismail.

Selatin [Sheqiri] always  took his car whenever he could as well, but nobody had good cars at that time, we had what we had. Then the terrain in the villages was very bad, for example, driving uphill with the cars we had back then was very difficult, we had to leave the car very early and go on foot, then it was also difficult to find the houses, but we had no problem in the villages on the plain. But, I told you that it was [difficult] in the beginning, but at some point we had a kind of authority, because they could realize that we were going to  someone’s as soon as they saw us, or there were cases when someone who had a case saw us and they wanted us to go as well, you know, we didn’t know, but we passed by and people said that, “Yes, there is one case there as well.”

[…] For example, when we went to the village of Pleshina, the old lady who was supposed to forgive her son’s blood said, “I thought,” she said, “That you didn’t want to come to me.” We said, “No, we didn’t know.” She said, “No, you went everywhere but not to me.” She had already told her sons that, “ I want to forgive the blood,” and they had confirmed, she forgave the blood on the first day, as soon as we arrived.