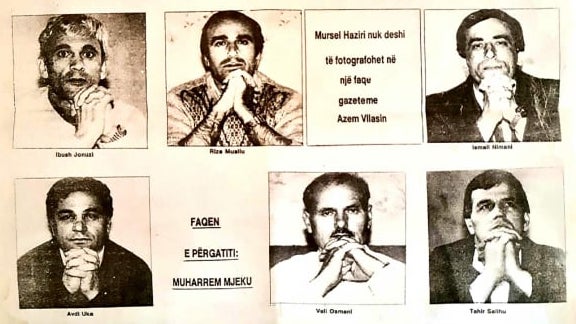 ‘Ukë, charges against you are grave, take care of yourself,  take care of your society.’ For me it was important advice, ‘Take care of yourself and society’ you know… the son of Shera came at 11 p.m, the son of the head of prison at the time, he worked as an inspector, Nexhmedin Ajeti, he was called or something like that. He brought a yellow sheet of paper and said, ‘Ukë,’ he said, ‘you have to go to prison,’ I said, ‘I am in prison, so no problem.’ The police came and handcuffed me and sent me to my cell. […]

I had five lawyers, all five of them worked pro bono. I did not hire any of them, but they asked my brother, ‘Authorize us to represent him.’ The Slovenian came on his own, he chose me. He said, ‘I chose you,’ he said, ‘I heard you have ten children, you have no education, you have nothing’, he represented me.

[…] on April 14, 1990, they released me. On August 15, 1990, they closed the gate of Trepça. In a span of four months, I was visited twice by UDB inspectors, as they were called at the time. Both were Albanians, they had Albanian names. They came and said to me, ‘Look Ukë, you cannot go back to the mine, if you do, we will lock you up right away.’ {locks his hands} ‘Give this to me in writing, I will not lose20 years of work experience over this .’ They said, ‘We are the police, we don’t hand things in writing. We are saying this as directly as possible in Albanian, don’t go there.’

I took my leave of absence twice, Burhan [Kavaja] gave me annual leave. He gave me days off from the upcoming year, and from the year we left behind. I no longer had any annual leave days. Two months, two months I went to the doctor to give me medical leave. I handed over the documents and did not enter the mine yard, I did not go in until after the war. After the war I went to the mine and worked there for three more years, this is after the liberation. Soon enough we realized that, even through strikes, we cannot change things and we joined the Kosovo Liberation Army, 52 miners from the Stan Trg were killed in war, 52 in war.

Avdi Uka was born in 1943 in the village of Tërstena, Municipality of Mitrovica. Upon completing high school in 1958, he started working for the Fafos state-run company. In 1967, he was transferred to the Trepça mine to work as a miner. At Trepça, he worked until 1990, when he got fired for participating in the Miners’ Strike in 1989. After the 1999 war, he went back to work at Trepça until 2002. Currently, Mr. Uka is retired and lives with his family in Vushtrri.