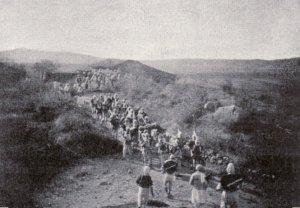 In the photograph: The abduction of the bride among Catholic peasants. Photo by Alexandre de Grande 1980s. Source: http://www.albanianphotography.net/

A Higher Motive for Reconciliation in Novosela

On February 10, 1893, the Jesuit Fathers Domenico Pasi and Angelo Sereggi, this latter from Shkodra, traveled to the north of Gjakova, to Upper Novosela, which was formed by 32 Catholic families of Fandesi [from the mountains of Fandi]. This village became the base for daily visits to surrounding villages, whose Catholic inhabitants were either Fandesi or from Merturi [Berisha].

In Novosela there was no church, but Nëkollë Gjetja had loaned his house to the Mission and Father Pasi moved the altar to the front door, so the women could be inside the house, and the men and youth outside. On the sixth day of the Mission, the Father asked whether there was anyone who would forgive an offense or injury in the name of Jesus Christ.  Below, Father Pasi’s story:

“Nëkollë Gjetja who was near me said, ‘Father, call Gini and make him forgive.’  Gini was the Fandese from Palabardh who had been so hospitable in his village […]. Some days earlier, Gini had come to me, and while I confessed him, he said, ‘Father, I would not miss confession for anything in the world these days, but I cannot do it before telling you in which state I find myself, because I know that one cannot steal an absolution. Some year ago, while in a nearby village they were shooting in the air because a bride had arrived, a bullet fell in my courtyard and wounded a little boy from my family who was blinded in one eye. It was not intentional, it was really an accident, and I, even though according to the world could exact half blood, that is, a wound, knowing that the perpetrator was not guilty, would have forgiven him if he had asked me.’ But instead things went another way and that person who shot in the air was krusck, or a person of the escort of the bride, and he wanted that the wound did not go to him, but to the head of the household where the bride was going, because he had shot for her. Instead, the head of the household wanted that the wound be attributed to that who had caused the injury.

Our Gini told the two litigious men, ‘The fact of the wound is certain, that I have the right to half blood is certain, that one of you owes me this blood is certain, now tell me with whom I should deal, whether with the one who shot and wounded, with the one who got married, with both of you, but do not leave me suspended, don’t make me the joke of the people; let’s come to an agreement and do not make a casual wound the beginning of a chain of bloods.’  Despite all this, many years passed without a decision about who was the one who had to pay for that wound; and this was a dishonor for the poor Gini, who appeared to the world as a coward not to be feared, and people began to make fun of him and gossip about him, and he found himself to be forced to a vengeance he did not want, and which would certainly have bad consequences for him, because none of the two to whom the blood belonged wanted to recognize his debt, and thus had Gini shot any of the two, he would have caused an injury which would have called for a new blood.

Now, Gini wanted to confess, but he saw he could not do it before coming to an understanding about this problem with the father confessor. I asked him whether he felt like forgiving the injury on those holy days . ‘Yes,’ he answered, ‘I would sincerely forgive it, and without asking for anything in return, because I know the injury was not intentional, but I would need that the ones who are responsible recognize that they owe me and ask for forgiveness. If they do not do this, which saves my honor, it is impossible for me to forgive, because I would become the joke of the village. I cannot forgive if the person who offended me does not ask for forgiveness, on the contrary, he does not care and shows contempt for me.’

I suggested him to make it clear that he would come to an agreement when the two who fought to avoid that blood asked him. ‘Father,’ he answered, ‘we told them and we begged them to not leave me and themselves in this state, but the Lord made them blind and they said they don’t care about me, maybe because they know that I am averse to spilling blood and fighting, and they force me to a vengeance that I don’t want.’

I told him to wait for a few days, to come to the Mission, and I personally would talk to his debtors. And I did it, but he had not had any answers, by the time, after the sermon on forgiveness, that we tried to reconcile the bloods. I had already decided to begin with Gini, who was well disposed to it, and when Nëkollë Gjetja told me to call Gini, I raised my voice and said, ‘Where are you Gini?’ And he said that he was in a nearby room, looking at the function from the door, and he immediately cut across the crowd and come to me, waiting for what I would say to him. ‘Gini,’ I said, ‘many among those who are here have hatreds to forgive for the love of Jesus Christ, and they desire to do it and be blessed on this day; someone has to begin, give the good example. Forgive the person who injured the boy and come to kiss the cross and receive the blessing for you and your family.’

Gini, as I said, was a good man, and would not have happily taken revenge on the person who injured the boy, but he needed another reason to forgive in order to save his honor publicly. Well, now he had one and immediately said, ‘Yes, I forgive for the love of Jesus Christ,’ and kissed the cross. Then, he called the other people in his family to kiss the cross, and they did it.”

After the forgiveness of Gini, others followed. One forgave the murder of a friend. A woman forgave the blood of her brother. Because she was alone, a man from another village had taken upon himself the task of avenging her; she told him to stop. The mission was considered a great success, because all the bloods were reconciled without any exchange of money, in fact when one asked for blood money, everybody protested, saying that forgiving in the name of Jesus Christ must be done without interest or gain.
Fulvio Cordignano, L’Albania a traverso l’opera e gli scritti di un grande Missionario italiano il P. Domenico Pasi S. I. Volume II, Roma: Istituto per l’Europa Orientale, 1934, pp. 157-62.