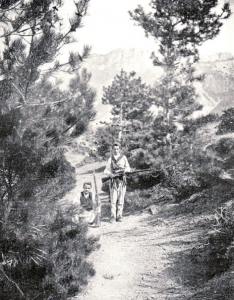 In the Photograph: Two boys in the countryside of Mirdita. Photo by: Alexandre Degrande, 1890s. Source: http://www.albanianphotography.net/

Let’s Not Become the Joke of the Turks

“It was October 16 [1893], the day of the Madonna del Buon Consiglio [Our Lady of Good Counsel], and it was the most beautiful day of the mission. In the morning, we administered the general Communion, pledging the promises of baptism; towards noon we sang mass and preached twice to an enormous crowd and we closed with the blessing. In the evening we did the Via Crucis, I gave some instructions to the people and especially the youth on how to answer and behave, so everything could proceed orderly.

Since they already knew the Stabat Mater, I asked which music they used in order to follow them and not force them to choose a different music. A twenty two year old guy, a certain Tizio [X], immediately answered, ‘We sing it this way,’ and he sang a few lyrics. Tizio was not a church cantor, but a well-known drunkard, and that day he was a little drunk. Despite that, he sung the lyrics as a master.

As it is understandable, that little scene made his relatives laugh, especially Caio [Y], the relative who was near him. Tizio was deeply offended by this innocent act, and the devil used this thin thread to weave a plot that could have sunk the mission with a horrible scandal.  [The devil]  heated Tizio’s head so that he got up and left the church, planning to wait for Caio at an appropriate place to kill him.  Nobody suspected anything. We did the Via Crucis, and attended the forgiveness sermon; then everybody stopped in the church courtyard to forgive each other and embrace each other, and  moved and happy, went home.

A little later, Tizio went to knock on Caio’s door, calling him and inviting him to go and have a drink. This latter, without suspecting anything, went along. After drinking the first glass, Tizio got up and offered Caio to accompany him for a stretch, as it is customary in Albania, especially when one is afraid of walking alone. Caio did it and they left together. After a small stretch, Tizio stops, takes Caio by the arm with his left hand, and with his right pulls the gun and says, ‘Since fate wants that tonight we find our ruin, I cannot avoid killing you,’ and he sets out to shoot. Caio was quick to stop his arm with his two hands and tell him, ‘What do you want to do? Are you crazy?’ not knowing though whether Tizio was joking or serious.  But Tizio lifted the knife he carried in his waist with his left hand. ‘Well,’ he said, ‘if you stop me from killing you with the gun, I will kill you with the knife.’ And he lifted his arm to hit him.

By chance, a Christian was walking by and Caio shouted at him, ‘Take his arm, don’t you see that this wants to kill me?’ He too thought that the two friends were joking, because they were relatives and loved each other. Anyway, he took Tizio’s arm and he began to fidget and show that it was not a joke, but he was serious. Others gathered to separate the two young people and take them to their homes, but Tizio was really angry and swore he would have gone to hell, but would have killed Caio, because he made fun of him in church.

The following day, after the effect of raki had evaporated, and thinking about what he had done at a such holy day and time, following the exhortation of the Christians, he said that he repented of his past and forgave Caio.

Before mass, I heard what happened the night before and thanked very much the Sacred Heart of Jesus and Mary who had spared us such enormous scandal, which would have destroyed the Mission and had already given occasions to the Turks to spread the most extravagant stories about us. After mass, the two young men, Tizio and Caio, were taken to me, so they could embrace and forgive each other in front of me, as they in fact did, to general satisfaction.

But Tizo was a member of the church congregation and that required a penance; however, because he was a hot head, we were afraid he would not accept a penance, and would create troubles.  But Tizio brought the medal of the congregation and said he would subject to any penance.  We suggested that it would have been of great education for the others and merit for himself if he asked for public forgiveness for the mistake he had done, and he accepted. In fact the next day, October 18, the last day of the Mission, after I blessed the crowd, while he was still holding the cross in his hands, I called Tizio and invited him to show that he had really repented of his mistake and would ask for forgiveness in public and kiss the wounds of the crucifix.  Tizio got up, came to the altar, kneeled three times and three times said loudly to the people, ‘M’bani alhal,’ forgive me, and for three times the people said, ‘Alhalh t’kioft’ may you be forgiven. He was asked to kiss the cross and got the medal of the congregation back.

As soon as I took off the cope and the stole, Tizio approached me and said, ‘Father, I want to confess, and to do it well, I wrote all the sins of my life on a piece of paper.’ He confessed, took communion. Many were moved to tears seeing this triumph of Grace on the same day in which, if the devil had succeeded, we would have celebrated the funeral of Caio, and would have become a joke among the enemy of our faith.”