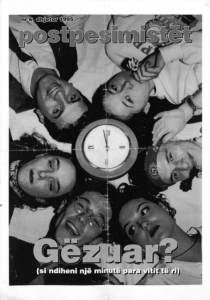 Because I had organized a Children’s Hearing in Bergen, Norway, in 1990, and helped organize an international Youth Hearing in Rio de Janeiro, Brazil, in 1992, I was invited to participate in a youth gathering in connection with the UN Human Rights Conference in Vienna in 1993. A group of adults from Germany, UK and Austria organized a preparatory meeting in Mürzsteg, Austria, where young people from many countries participated. Together, the participants made a play, a song, and decorated a real tree with all the Human Rights that these young people wanted to draw attention to. The root symbolized the rights to life, to liberty and security, to freedom of expression and to education. The branches depicted some of the problems: money spent on arms, unemployment, child labour, and poor schools. The fruits hung on the branches, promises the politicians were asked to pledge: say no to child soldiers, say no to child labour, give us protection from violence, listen to what we have to say…This huge tree was transported to Vienna and set up in the Conference Hall (don´t ask me how we managed, but we did).

During the preparatory meeting in Austria a group of youngsters from Former Yugoslavia happened to meet. Remember this was in 1993, the war was raging and all of a sudden these young people who used to live in the same country, Yugoslavia, had found themselves at war with each other. During this week in Mürzsteg young people from Ex-Yugoslavia got to know each other. They discussed, quarreled, danced, sang… and they agreed that they really needed to see each other again.

In 1993 I was asked by the Olympic Committee that was preparing for the Olympic Games in Lillehammer, Norway in 1994, if I would be willing to organise an international Peace Festival for young people as part of the cultural program. The festival was to take place in the fall of 1993. I agreed of course and together with Helle Berggrav Hanssen we invited one boy from Kosovo, one from Serbia and a girl from Croatia, together with 45 other youngsters from all over the world.

These young people worked hard for a week, they created a show consisting of a puppet play, an artificial tree, where the leaves presented the needs of children, songs and skits, plus a very serious hearing, where the audience was confronted with all the troubles young people face all over the world. As one of the girls put it: “You know that children suffer, why don’t you do something?”

Petrit Selimi, who was one of the youngest participants, asked us, the organizers, if it would be possible to organize another meeting for young people from Yugoslavia only. As he put it: “We need to talk, to discuss, to get to know each other, maybe we could even become friends, despite the situation.” We liked the idea. Petrit from Kosovo, Ivan from Serbia and Danijela from Croatia sat down together and wrote the draft of an application for funding from the Norwegian Ministry of Foreign Affairs (NMFA). The Ministry agreed to fund a meeting where we could discuss what to do and how to proceed.

Thanks to Werner Greis of the United Games of Nations, a few months later a new meeting took place in Mürzsteg, Austria; about 20 young people from Croatia, Serbia, Kosovo and Bosnia participated. It was a great experience. It was obvious to all of us that these youngsters needed to get together on a regular basis. The problem was of course the funding, how to organize the meetings and when. Werner Greis and I agreed we wanted to support them. We decided to jump over all difficulties, just DO it. I again managed to convince the NMFA to give us the money, and we decided on another meeting in December of the same year, 1994. This time the participants wanted to bring some helpers along, they decided to ask three psychologists, who were experts on peaceful communication, to join. These three introduced the Giraffe language which became one of the trade marks of the early Post-Pessimists. Around 20-26 young people from the 4 new countries, Croatia, Serbia, Bosnia and Kosovo, were invited to participate.

This meeting was really the basis for what was to become the Post-Pessimists movement. A small movement in numbers, but I am convinced it had a very important impact on those who participated.

At the end of that first meeting, they decided on the name “the Post-Pessimists.” As they said: “We are not yet optimists, but no longer so pessimistic.” It was agreed that this first meeting needed to be the first of a series. We wanted to have another gathering within a few months. So again, we had to apply to the NMFA and again, they agreed to fund another meeting. Helle Berggrav Hanssen and I were colleagues working for Norwegian People´s Aid in Oslo and the NGO supported the project. Together we organised two summer meetings at Hove, on the Southern coast of Norway.

In March 1995 we were invited to another Peace Meeting in Narvik, Norway, where 20 Post-Pessimists participated together. Former Peace Mediator Kai Eide was the keynote speaker. Through these few days he became a friend of the Post-Pessimists and a strong supporter, which became very useful a few years later.

That same year, Helle and I were asked by UNICEF to organize a youth meeting in New York, to celebrate the UN 50th anniversary. This was of course an invitation we could not refuse, but little did we know how difficult it would be to work with UNICEF and to be responsible for 36 young people in the Big Apple. Without Werner Greis from Austria and Miklos Banhidi from Hungary we could not have done it!  Post-Pessimists participated together with young people from all over the world. Once again the participants worked hard to present to the UN all the concerns that young people feel. It was a great performance. They danced and sang, they spoke very seriously about the plight of so many children. The only problem was that UN did not really pay much attention…

The Post-Pessimists project grew and prospered during the following years. More and more the Post-Pessimists took over the planning and running of the activities. Dado Pudar, a Bosnian actor who lived in Norway, became an important contributor. He helped them write and design several plays, which they performed at the end of each meeting. The most dramatic moment was when we decided to meet in Hungary at the Balaton Lake. Half of the group decided to work on a play with Dado, and we wanted to take the play on tour to Zagreb, Tuzla and Belgrade. This was in 1997! Twenty young people from Croatia, Serbia, Kosovo, Bosnia and Slovenia were the actors. We had a lot of trouble getting the visas, but a little later than planned we set off in a rented bus.

The play was performed in Zagreb and in Tuzla and we were all happy with the audiences and the play itself. But in Tuzla we ran into real trouble. I was told by the Bosnian police that we would not be able to leave Tuzla the day after, as planned, because the roads would be blocked and we would not be allowed to pass. What to do? I had the responsibility of twenty young people from all over the Balkans, and the “friendly feelings” in the different countries were not all that obvious so early after the war! Then, having friends in high places turned out to be a real blessing. I called Kai Eide who was then the UN Representative in Bosnia. He sent a UN car with an officer who escorted us safely across the border and into Serbia. My relief was indescribable!

Later on we organised a Post-Pessimists meeting in Mostar, which was terribly hot and a bit touchy, but it went well and was an interesting experience. Several meetings followed, the one I remember best was the one the Post-Pessimists organised all by themselves in Slovenia. Quite impressive!

In between the international meetings, the Post-Pessimists were active in their own countries, they organised cultural events, produced youth magazines, art exhibitions and debates. In Kosovo there was a youth centre, which was meant as a meeting place between Serbs and Albanians. It functioned for a while, but as the conflicts escalated, mostly Albanians used it.

In Serbia the Post-Pessimists organised a secret network called Resistance Movement, which later became a part of Otpor, a youth movement that definitely helped ousting Milošević.

One of the good parts of the Post-Pessimists movement was the young people’s own initiatives and leadership. They asked for help to fund the activities, but they wanted to run the movement themselves.  For Norwegian People´s Aid (NPA), it was an interesting experiment, which led to other initiatives and activities. I am convinced that the young people who participated actively learned a lot, and that they contributed to their societies in a positive and creative way.

I am convinced that all these meetings and the projects contributed to a more peaceful development. Quite a few of the active Post-Pessimists are today in important positions, with the possibility to influence the political situation in their countries. The fact that some of these participants are still friends today proves to me that the efforts were worth the trouble and the money.

Out of the Post-Pessimists movement another youth program developed. NPA organised several international meetings in Norway, in the USA, in South Africa, Zimbabwe and Malawi, where Post-Pessimists had the opportunity to meet young people from other parts of the world; Palestine, Kurdistan (Iraq), Rwanda, South Africa, Norway, Malawi, Zimbabwe… They had fun together, they learned a lot from each other. They learned that other people have problems not too different from their own. But first and foremost, they learned that people from other cultures, other countries, of different religions and different skin colors, have lots of resources, intelligence, and energy, just like themselves.

I consider the Post-Pessimists movement first and foremost a peace project. Young people, suddenly finding themselves at war with each other, had the opportunity to meet, to talk, to quarrel and discuss, but also to dance and sing and fall in love, disregarding new borders. Serbian boys became friends with Kosovo girls, Bosnian youngsters spent time with and made friends with Croatians, Slovenians and Serbs. Together we organised an impressive series of meetings, including the incredible theater tour, young people from all over Balkan travelling to Zagreb, Tuzla and Belgrade together, two years after the war…  To me this was a small miracle.