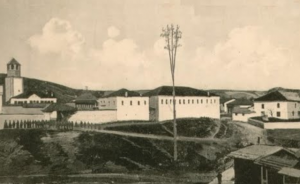 In the photograph: River Krena and Çabrati hill in the background, Gjakova.

The Blind Beg and the Fandesi of Gjakova

In August 1890, the Jesuit Father Domenico Pasi travelled to Prizren from Shkodra in the company of a lay catechist and an armed Muslim escort who belonged to one of the main family of Fleti. This party took a little more than three days to complete the trip on horseback: the first day they reached Puka in 10 to 12 hours, the second Vau-Spas in another 12 hours, and the third they had to stop in some Muslim village because their escort, afraid of the troubles he had heard were afflicting Gjakova, took secondary paths and avoided coasting the river and get to Kukës after crossing Montenegrin lands.

When they got to Prizren, at the beginning of the fourth day, they heard the rumors that in Gjakova a rebellion against Christians, was brewing. The parish priest of Prizren, Don Simone Lumesi, who was also general Vicar, had gone to Gjakova to reassure people. Here we paraphrase the story of what happened, as Cordignano gathered it from Pasi’s reports.

After the Austrian occupation of Bosnia, many Muslims emigrated south to return under Ottoman rule. They were called muhaxher. Among them there was a beg who among other crimes had killed an prominent Austrian official and had found protection among the Krasniqi, Gashi and Bytyqi, with a besa. Qorr Begu, the blind beg, was his name; he had many wounds, one from a bullet gone through his eye.

One day, when he was traveling on his horse, he met a Christian, a Fandese, on the road. The Fandese was on a cart and the road was narrow. Qorr begu demanded the right to pass first, but the other man said he had a cart with two oxen and thus the horse should have given way to them. The fight that ensued led the beg to insult the man but also Christianity in general. The Fandese shot him dead, then rushed to his village and locked himself in his kulla. All the Muslims of Gjakova rushed to the village of the killer but were told that they could only kill the killer or his family, and had to leave the rest of the village alone. They were momentarily satisfied with burning down the house of the killer and other two   houses of his relatives. But the beg was under the besa of many important tribes, that said that the burning of the house was too little. The rumor spread that Austria had paid for the death of the beg and that all Fandesi, 400 families, were guilty and thus had to be either killed or expelled.

I Fandesi were all from Mirdita, from the mountains of Fandi, and had come to Gjakova to escape blood feuds, or poverty; they were sharecroppers or renters of local Muslims, who had preferred them to other Muslims for their work ethics. Unlike other Christians, for a special dispensation from the Ottomans, they were allowed to carry weapons.  Muslim Gjakovars abandoned them. The Fandesi then  tried to take time and sent a mediator to Istanbul g. Among their lawyers there was a certain Topalli, or “the crippled,” as they called him because he had a leg wound. He knew the kanun of Lek Dukagjin and knew how many cases had been decided, we would say he knew the case-law. In the past, he had been sentenced to death by a Pasha together with others, but he argued his case so well that the Pasha not only forgave him, he showered him with money and honors.

Kolë then went to Gjakova to defend his Fandesi, went to the courts, talked to influential Turks, obtained a besa of three days, but also threatened them of serious retribution had they attacked the Fandesi. From Istanbul orders came through the Governor of Ipek (Peja) that before offending the Fandesi the Gjakovars had to think twice. The mountain people, who had come to town looking for booty, could not do anything to the Fandesi, thus they stole some cows belonging to Turkish urban people.

The case would not have been solved easily had the Austro-Hungarian Consul not interceded through a telegram to the Vatican Internunzio [Papal Envoy] Austriaco in Istanbul who talked to the Grand Vizier who then sent orders to the governor of Ipek to protect the Fandesi. The priest of Prizren don Simone Lumesi had been the main mediator of the whole crisis, and he was coming back to Prizren escorted by 14 Fandesi.
P. Fulvio Cordignano, L’Albania a traverso l’opera e gli scritti di un grande Missionario italiano il P. Domenico Pasi S.I. (1847-1914), Roma:  Istituto  per L’Europa Orientale, 1934, pp. 121-123.