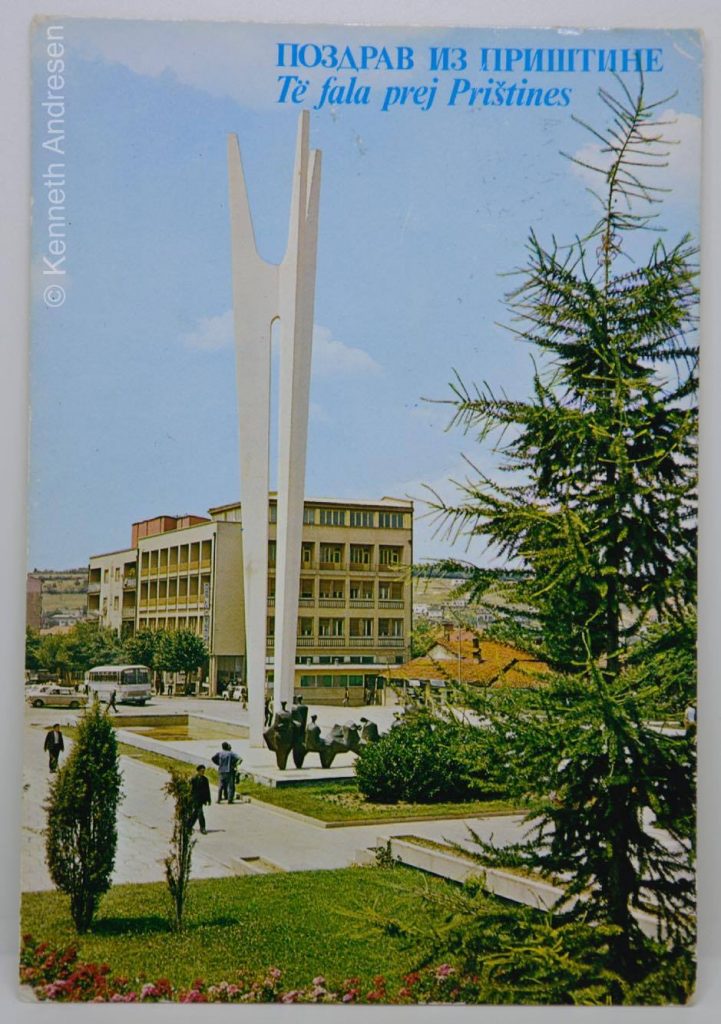 In the most central square of Pristina, across from the Parliament, there is the monument to Brotherhood and Unity, or to the common heroes of the Anti-Fascist National Liberation Movement. We are in possession of many postcards of this monument – three separate pillars of 22 meter of concrete and rebar, connected at the top -, in which it appears at the center of a tiled public square, to anchor a panorama of the city. Completely abstract, it is supposed to symbolize the unity of the three main nations living in Kosovo and part of the partisan war, Albanian, Montenegrins and Serbs. Eight much smaller statues of partisan soldiers, standing in its front, seems to have less symbolic significance and are rarely seen in postcards. The memorial was designed by Miodrag Živković (Leskovac, Serbia, 1928 -), and completed in 1961. 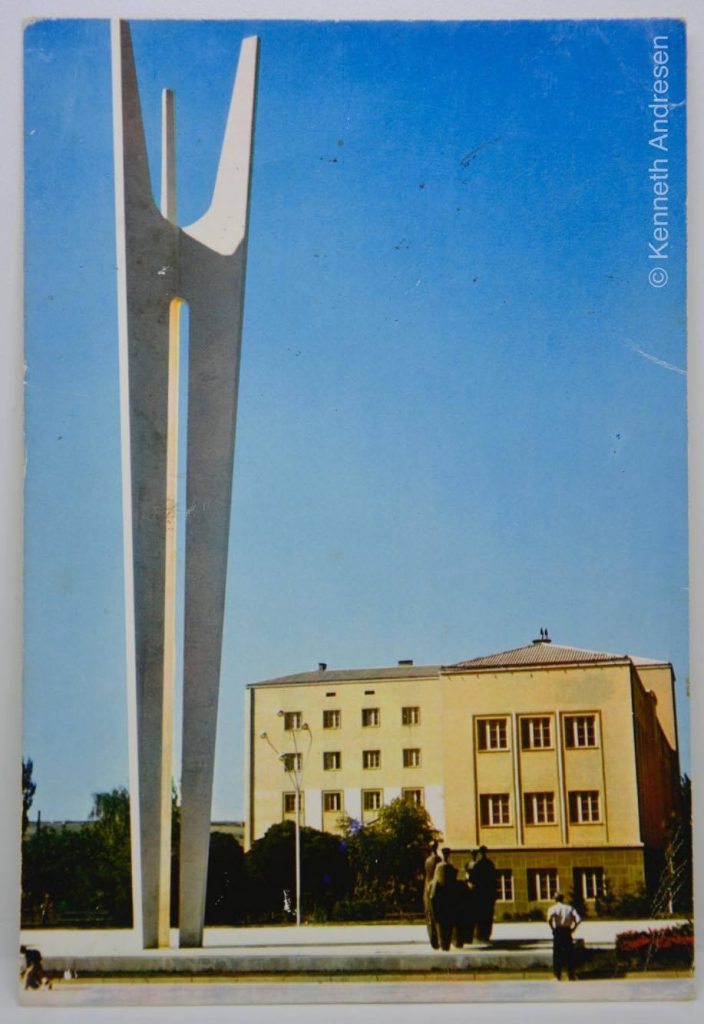 In postcards dating back to the 1960s, it is featured against the backdrop of the old government building; or in the midst of the less-developed urban center of the 1970s. 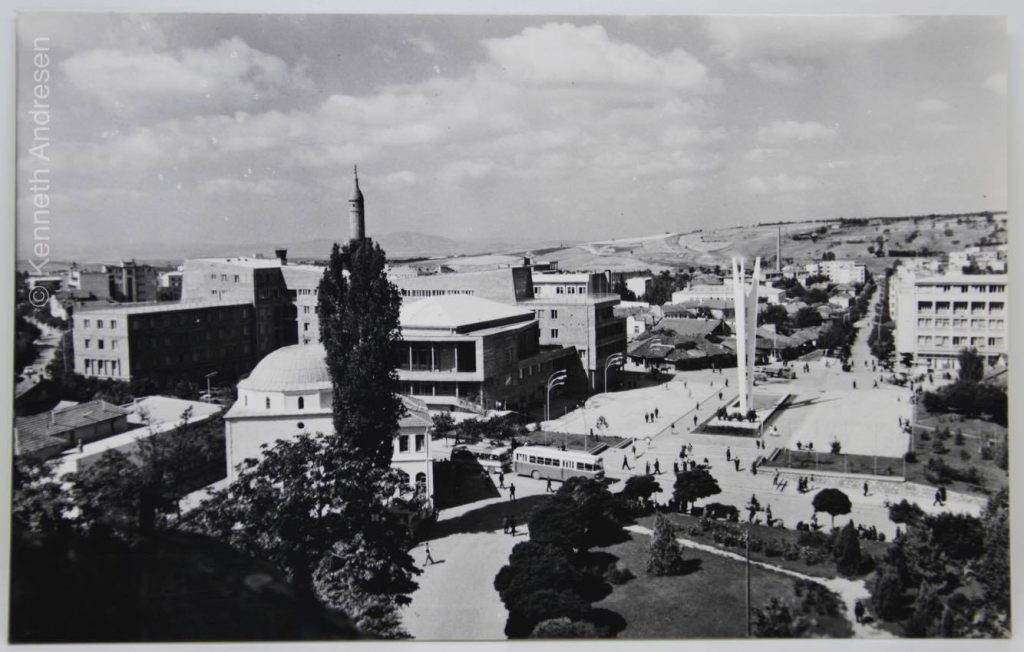 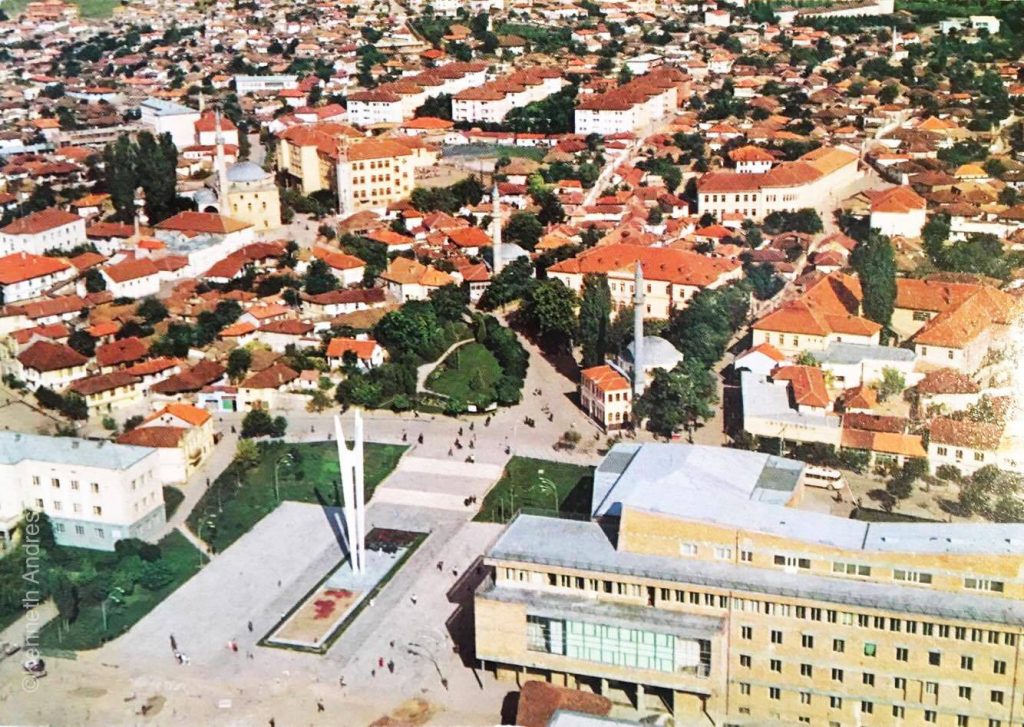 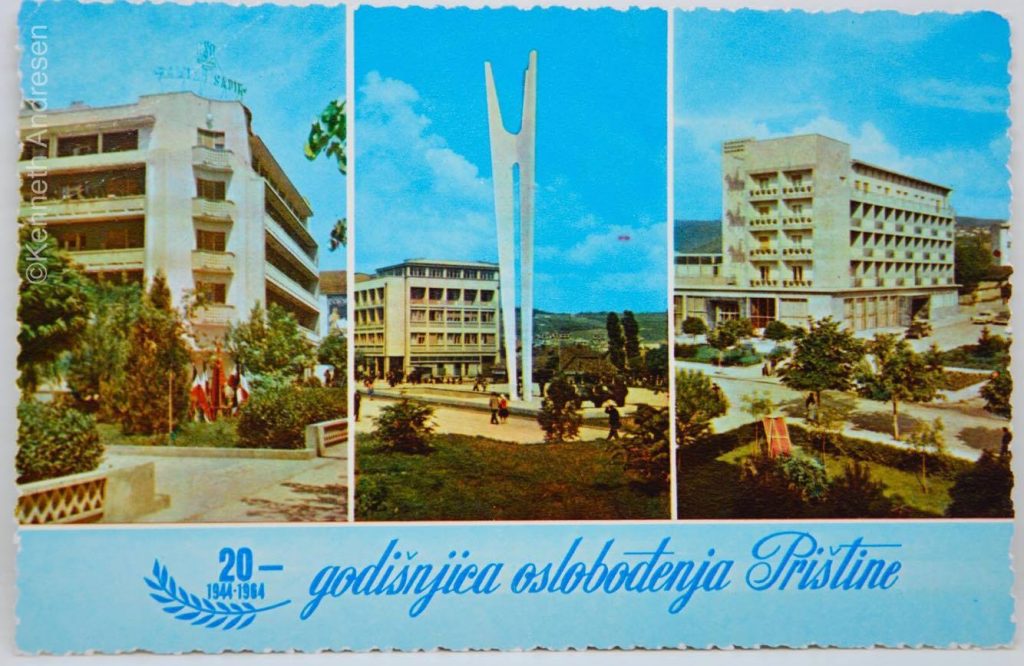 Greetings postcards from Pristina include the monument together with images of the Serbian Orthodox Church in Gračanica; the Tower at Gazimestan; or the turbe [mausoleum] of Sultan Murat I in nearby Mazgit. All these structures are out of town and with the exception of the Church, built in the fourteenth century, none is very old.

Both the Tower and the turbe are memorials to the 1389 Battle of Kosovo, respectively a tribute to the Serb heroes fallen against the Ottomans, and a shrine to the Sultan, killed in the immediate aftermath of the Battle and buried in Bursa (Turkey), while his entrails were kept in Mazgit.

The first monument was built in 1953 during the Socialist Federation of Yugoslavia, to replace an older, post-WWI obelisk, perhaps too religious in its dedication. The second was completely renovated in the nineteenth century, on the eve of the collapse of the Ottoman Empire, after centuries of neglect. 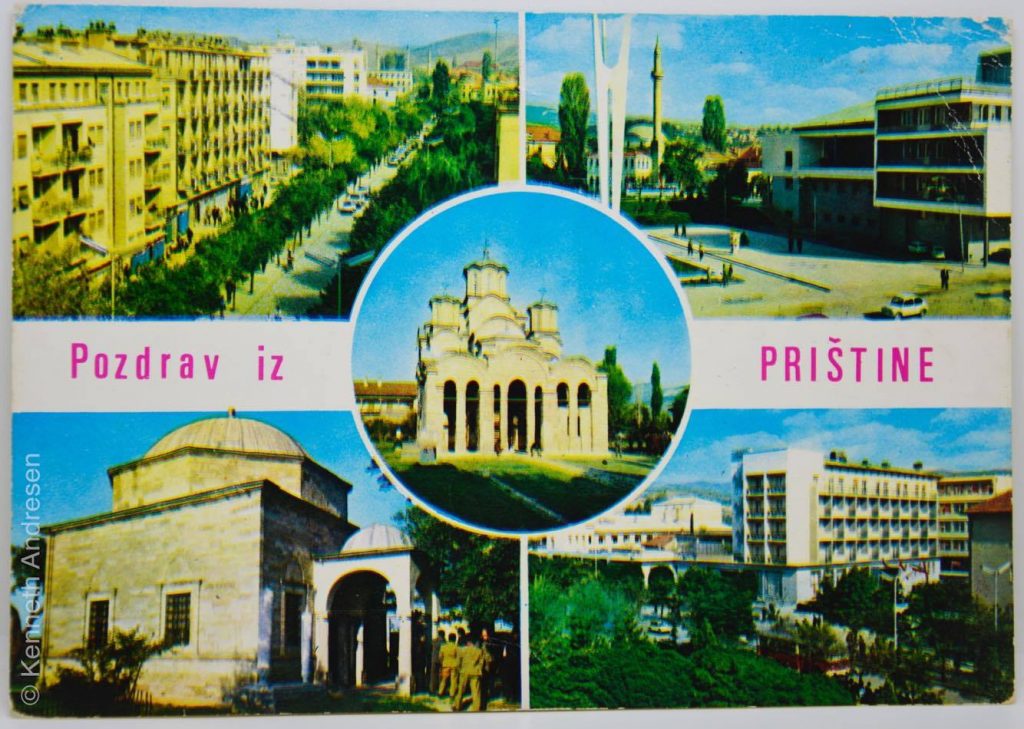 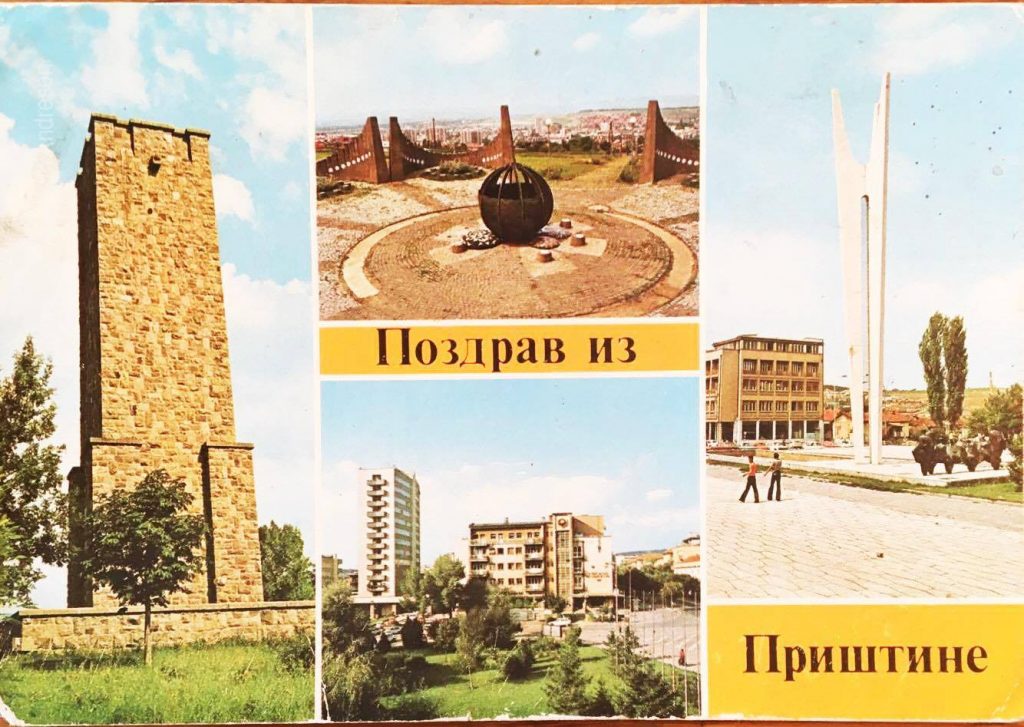 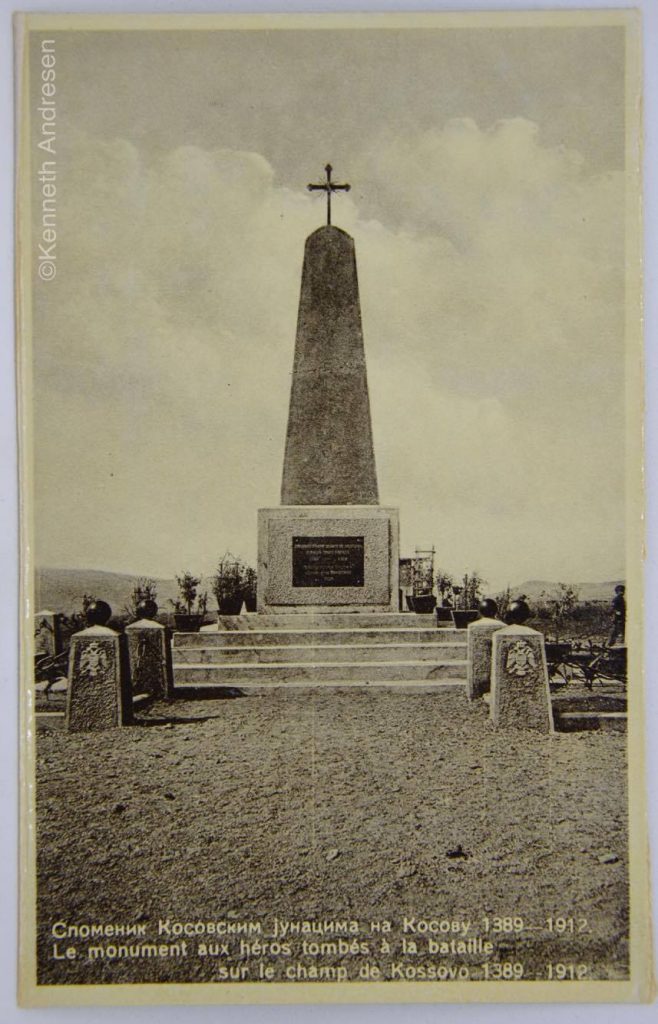 In some postcards, the monument to Brotherhood and Unity appears with exclusively modern views of the residential city, one showing the outdoors pool at the start of the pedestrian main street, the so-called Korzo, then Marshall Tito Street, now Mother Theresa Street. The pool was removed in the late 1970s to make room for the Hotel Grand, and was never rebuilt, as originally planned, in the new, gigantic Sports Complex Boro and Ramiz. 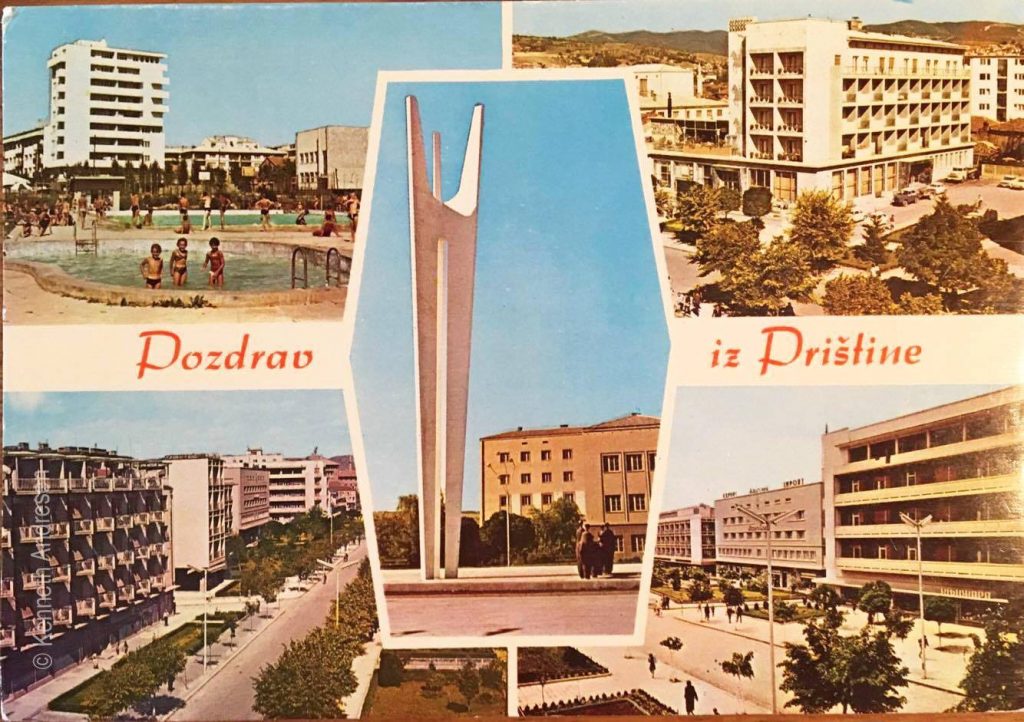 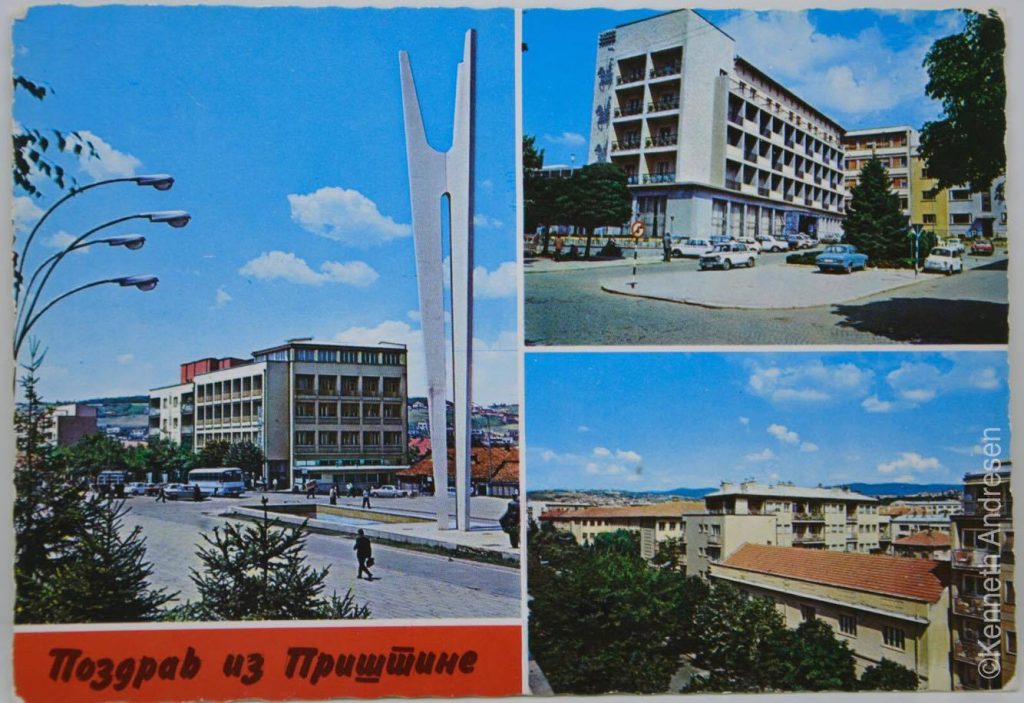 Today, the Brotherhood and Unity monument still stands in front of the new Parliament building, which is larger than the old one but still modest in scale, and the municipality. Fallen into disrepair, it occasionally becomes the subject of debates over its role and there are those who advocate its removal, but there has never been a real attempt to destroy it. It remains almost invisible, like often monuments are, according to Austrian writer Robert Musil.  It is difficult to imagine that fifty years ago it was built during the most revolutionary transformation of Pristina since the Ottomans. Modern Pristina in fact emerged after 1945, from state-directed, socialist urban development projects, when it became the provincial capital of Kosovo in 1947, replacing more stately but smaller Prizren.

After 1945, at the tunes of the song, “We must destroy the old word and build the new one,” scores of “volunteers” drafted by the Party brought down the covered Ottoman market at the center of Pristina in three days, as Fadil Hoxha recalls in his memoir (Në veten e pare, 2010, p. 306).  A new urban center took its place, with the Regional Parliament, the National Theatre, the Municipality, and the Monument to Brotherhood and Unity. In Valbona Shujaku’s Prishtina. Poetic Memories (2011), old photos from the Museum of Kosovo show what once was the main east-west axis [Divan Yolu in Turkish, Divanjolli in Albanian, literally the Road to the Imperial Council, linking Constantinople to Rome], which was destroyed to make room for this new development, in particular for Brotherhood and Unity Square.

As the new modernist buildings were erected, they blended with the fifteenth century Bazaar (Tas) Mosque and Big Mosque, and with the small-scale residential buildings in the center. Besnik Pula wrote that the effects of Yugoslav planning in Pristina were more evident after 1965, when the Federal Fund for Underdeveloped Regions was created and Kosovo was allotted 40% of the funds, having fallen behind the rest of the country, much of which went to the capital Pristina. But the new development shifted to the west and south, to Ulpiana, Bregu i diellit, and Dardania in the 1970s and 1980s. Pristina was left with a modest, modern center, until after the more recent war.

Since 2000, high-rise residential buildings, including the high-rise that host the government, have begun to encroach on the once modern Yugoslav center. No longer Brotherhood and Unity Square, the landing on which the monument still stands is now called Adem Jashari, after the greatest hero of the Kosovo Liberation Army.