Traces of the Lives of Others 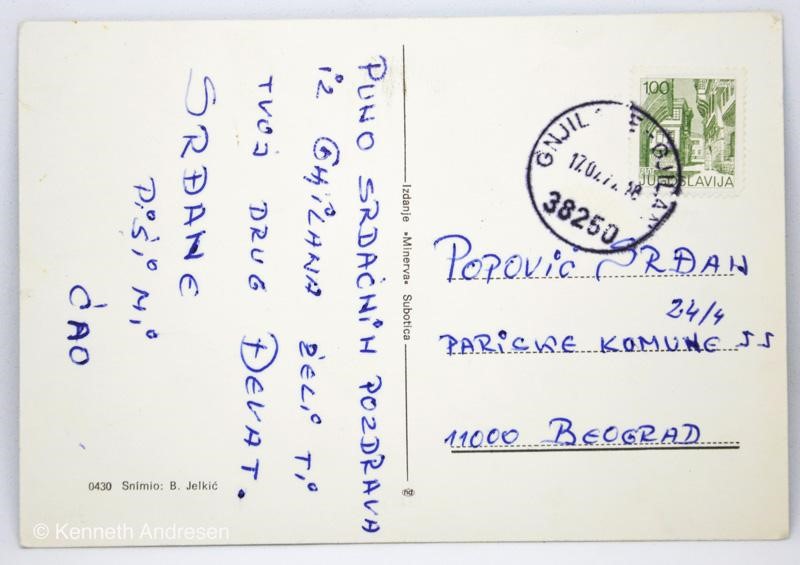 Xhevat, writing from Gjilan in 1972, sends warm greetings to his best friend Srđan in Belgrade. The tentative writing style, and the warmth of the exchange suggest young correspondents. Where they friends in Gjilan, before Srđan moved to Belgrade? His address is in Novi Beograd, where many military lived. Or perhaps he always lived there and met Xhevat at some country-wide school competition, where they became friends.

We can never know the full story behind this postcard, which gives us only a fragment of information about the lives of Xhevat and Srđan, but we know the context of Yugoslavia, and can imagine possible scenarios of this friendship against the backdrop of a country in which national relationships had not deteriorated yet.

The messages in the back of the postcards in the collection are mostly telegraphic. They are all in Serbian, with one exception. People sent greetings to family members, friends or acquaintances, living in other parts of Yugoslavia. The dates range from 1964 to 1985.

In the back of one postcard from Prizren, dated 3.12, perhaps 1966, Sanja from Prizren writes a list of local mountains: Zlatibor, Kopaonik, Žabljak, Brezovica and others, addressing the card to the Sava Center in Novi Beograd, where one would send answers to a quiz show, Trik, which aired on Treći Kanal Television. From the answer, we might guess that it would have been a simple question. Was she hoping to win the prize for the correct answer?

In a postcard dated 7.10.1974 sent from Pristina, Mičko writes his friend Milosav in Boljevac, a small town in the Eastern part of Serbia, about having just been at the Faculty and found that lectures would begin from October 12-15; he asks Milosav to bring him a watch, when he comes to Pristina. We can guess that since the University of Pristina was well established in 1974, it was attracting students from Serbia. 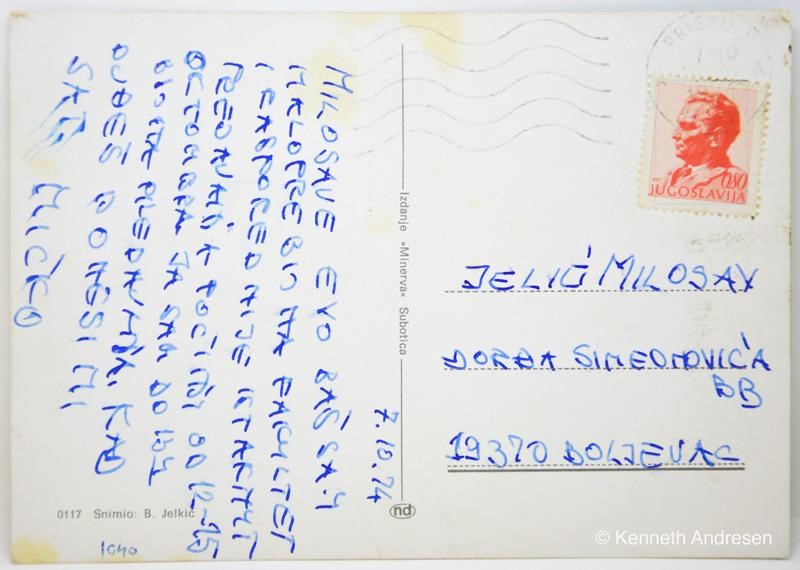 Maybe Sonja, who writes on 17.2.1970, was a student from Pristina: she informs Ratko (a relative? A boyfriend?), at the address of a military post office, that she did not pass an exam, so he would not stress out now for not having news from her. 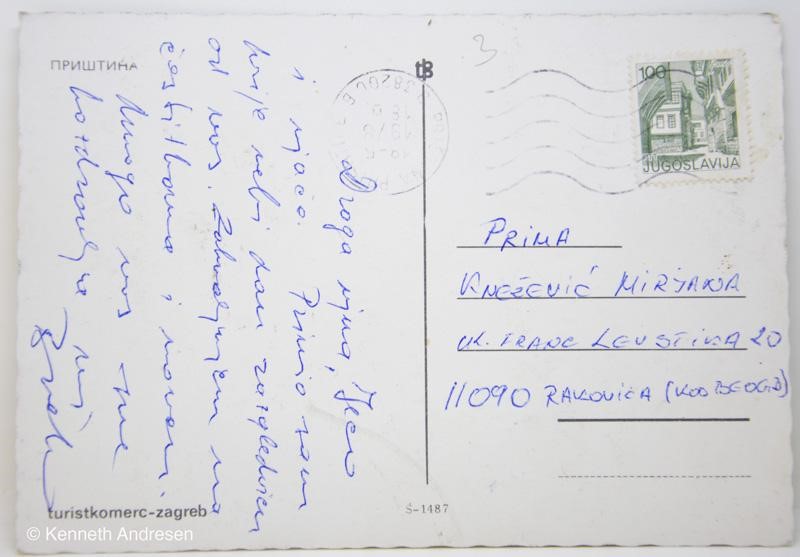 In 1973, Dragan send greetings to his family in Zagreb, adding that he has just arrived in Pristina, which feels very far from home, and Ante writes simple greetings to this mother-in-law and the family of his sister-in-law, addressed to a very small town near Derventa, in Bosnia. What have they come to Pristina to do? Are they also students? Writing from Gjilan in 1984, Milan asks his girl Lolita in Skopje to write him, adding wishes of seeing each other soon. A student as well? Or a soldier?

An undated message from Lale, during his military service, is addressed to his godmother in Belgrade to apologize for not having greeted everyone, and not being able to send his address, which he does not know because he is not in the barracks. When were Serbian recruits sent to Pristina? When was Lale there?

Marija writes a thank you note on 28.11.1970 to a woman whom we gather would have been her hostess, Nasta Popović, in Vrnjačka Banja, a spa in Raška, Serbia; she tells her how well she felt after her stay, especially the little Vesna, and greets the whole family (or are they employees of the spa?) listing them all by name. This card opens a different window on the life of socialist citizens, who were able to spend time at state spas to treat various ailments.

More enigmatic, an unsigned greeting dated 24.11.1964, sent to Milovan in Belgrade, announces a quick return two days later, via the Croatian region of Kordun. Why taking that long route to return to Belgrade from Pristina? The message continues, cryptically: I got your letters and I understand everything you write me. In 1964 Kosovo was still under the firm grasp of the Minister of the Interior Aleksandar Ranković, who pursued any suspected enemy of Yugoslavia and considered the Albanians in Kosovo enemy by default. Does that explain the anonymity of the message?

Among the very few Albanians among the correspondents, one sends telegraphic greetings to his brother Idriz at a youth hostel in Zagreb, acknowledging a letter from him, on 17.11.1975. Ramiz Luka writes in Serbian to Paul in Zagreb, on 2.2.1982, thanking him for the New Year’s greetings, expressing his concern for his illness, and announcing he will bring the pants personally to him. Who was Paul? An acquaintance? A client? Someone who worked in Pristina and had been detained in Zagreb by a deteriorating health after the holidays? Was Ramiz his tailor? 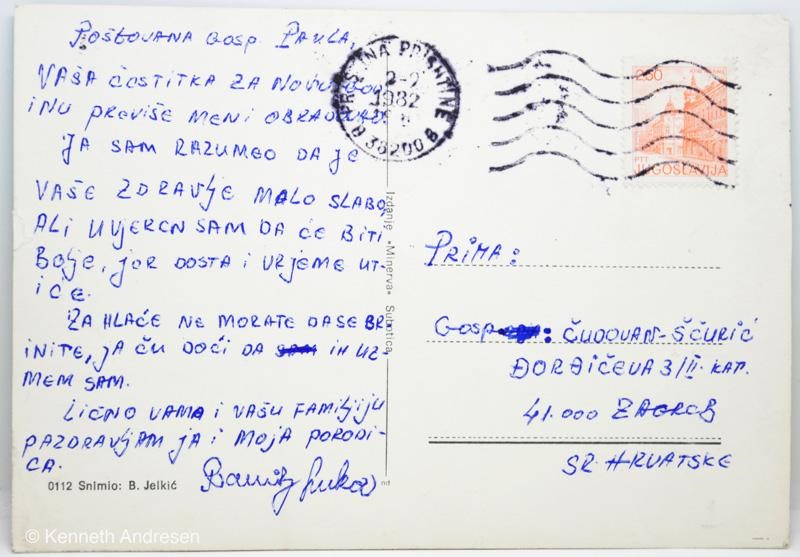 Postwar Kosovo postcards in the collection Return to Sender were mass-produced by large Yugoslav companies, well-know at the time, such as Minerva in Subotica and Turistkomerc in Zagreb, and to a much less extent NIRO Eksport Press and Knjizneve Novine in Belgrade, Turistička Stampa in Belgrade and Zagreb, Duvan in Pristina, and Naš Glas in Smederevo. In a couple of instances, there is collaboration with a printing house in Italy, the ditta Bruni (or Brunner) in Como.

There is no big surprise here, in the context of Socialist Yugoslavia, except perhaps the lack of local production, though the sample of postcards is too small to draw any conclusion. For the same reason, it is hard to make much of the fact that the messages that appear on the front of the postcards, “Greetings from Prizren” or “from Pristina,” are more often in Serbian, whether in Cyrillic or Latin alphabet. Only rarely they are also in Albanian; once, from Prizren, in Turkish.